[THE INVESTOR] Having the richest man in the country as a father is not just about having lifelong access to fortune. As members of the family in the Samsung empire, not only Lee Jae-yong, the chairman’s only son and the heir apparent, but also his two sisters have long been in the public eye, along with much speculation.

Will they be competitors or collaborators in the new era of Samsung, soon to be ruled by their untested brother? The latter, experts say. But they might take their own path afterwards, just like their uncles and aunt did soon after control of the group was passed on to their father.

“The chairman’s two daughters, Lee Boo-jin and Lee Seo-hyun, are following the path already taken by the sons and daughters of Samsung founder Lee Byung-chull,” said Park Ju-gun, co-president of CEOScore, a market research firm in Seoul, referring to how Shinsegae and CJ Group were separately established by their uncles and aunt. 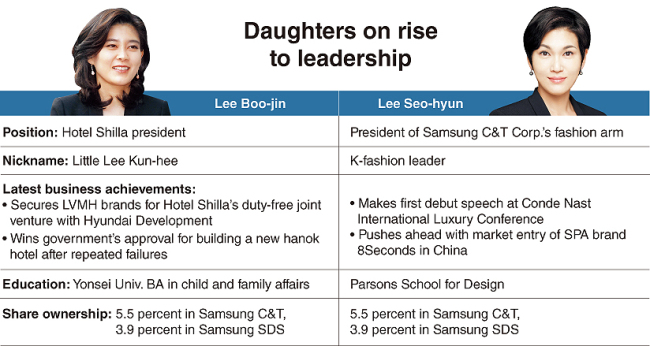 Lee’s eldest daughter, Lee Boo-jin, the president of Hotel Shilla, has been frequently mentioned as a competitor to her brother.

In addition to the lucrative hotel business, she was reportedly expected to be given control of Samsung’s chemical unit to further expand her presence within the group. But the wild guesses ended up as mere rumors as Samsung sold its entire chemical unit to Lotte Group last year.

However, Lee Boo-jin being mentioned as her brother’s potential competitor reflects how much she has proven her management achievements in a short period of time, according to industry watchers.

“In contrast to Lee Jae-yong who tends to follow the existing path, Lee Boo-jin has been making bold moves. She has her own color,” said Jeong Sun-sub, the CEO of chaebul.com, a market tracking firm based in Seoul.

Since joining Hotel Shilla in 2001, Lee Boo-jin has made massive investment in the duty-free business under Hotel Shilla.

Hotel Shilla operates two duty-free stores in Seoul -- one on its own and another one through a joint venture with Hyundai Development. By withdrawing from the domestic bakery and cafe business, Lee chose to expand Hotel Shilla’s overseas instead. The hotel operates duty-free shops in Changi Airport in Singapore and other airports in Asian cities. Hotel Shilla recently decided to acquire U.S. inflight duty-free operator DFASS.

Thanks to the cash flow from its duty-free business, the revenue of the hotel surpassed the 3 trillion won mark last year from a mere 430 billion won in 2001.

“Numbers tell it all. She has established her own business entity by herself, by breaking the market dominance of Hotel Lotte in the duty-free business,” said Park.

While Lee Boo-jin has came under the media spotlight for her unexpected performance, Lee Seo-hyun appears to be struggling with her own entity -- fashion.

The youngest daughter of chairman Lee is president of Samsung C&T’s fashion arm. As a graduate of Parsons The New School of Design in New York, she joined the group fashion unit which was then under Cheil Industries in 2002.

The 43-year-old, known as a fashionista in the corporate world, is said to have supported a number of talented Korean designers’ debuts in New York, elevating Korean fashion to a new level.

But in the business aspect, Lee has a long way to go.

“I think she has made a few technical failures, particularly her business strategy on fast fashion,” said Park of CEOScore.

Lee has been focusing on Samsung’s fast-fashion brand 8Seconds and the brand’s entry into the China market, stressing that the brand will challenge other global brands such as Zara and H&M. But no noticeable progress has been made so far.

Making her first international debut as a keynote speaker at Conde Nast International Luxury Conference in April, Lee said that technology will play a significant role in revolutionizing the global fashion industry and that Samsung is ready to take the lead in the marriage of technology and fashion.

Calling it a vague concept, an industry watcher who declined to be named, said that this demonstrates how she sees herself as a part of the Samsung empire.

With regards to ownership in the Samsung controlling structure, the two sisters hold evenly -- 5.5 percent each in Samsung C&T and 3.9 percent in Samsung SDS. Their ownership makes them the two most richest women in Korea.

But for now, the sisters’ inherited shares in Samsung affiliates are just a mere tool to support the family’s grip on the Samsung Group.

“Their stakes in Samsung affiliates are to back up Samsung Group, the family‘s management right. They might seek to go separately after the succession, but not in near future,” said Park.