Choi Ji-man of the Los Angeles Angels has finally gone deep in the majors. 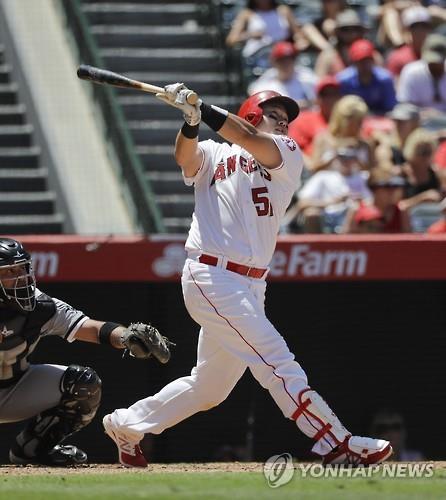 The Korean first baseman led off the bottom of the fifth with the Angels down 4-2, and crushed Griffin's first-pitch fastball over the right field wall to make it a one-run game.

Sparked by Choi's blast, the Angels rallied from a 4-0 deficit to win 9-5. They scored twice in the sixth and added four more in the seventh.

Choi, a Rule 5 pick by the Angels last year, made the Opening Day roster for the first time, after six seasons in the minors. He made his big league debut in April but was sent down to the minors in May after clearing waivers.

Choi returned to the majors on July 9 in place of injured C.J. Cron, and prior to Monday, Choi had batted 4-for-14 with an RBI, two walks and a steal since the call-up. (Yonhap)