From outside, the building seems nondescript. It sprawls wide and low amid the serene natural scenery of Buyeo in South Chungcheong Province, looking like a government building or perhaps a school.

But once inside, the rumbling hum of machinery, bright clean rooms and head-to-toe white paper gowns make it clear that this is a factory where something precious is created. And in the air, there is a heavy, bitter aroma that is unmistakable for most Koreans. 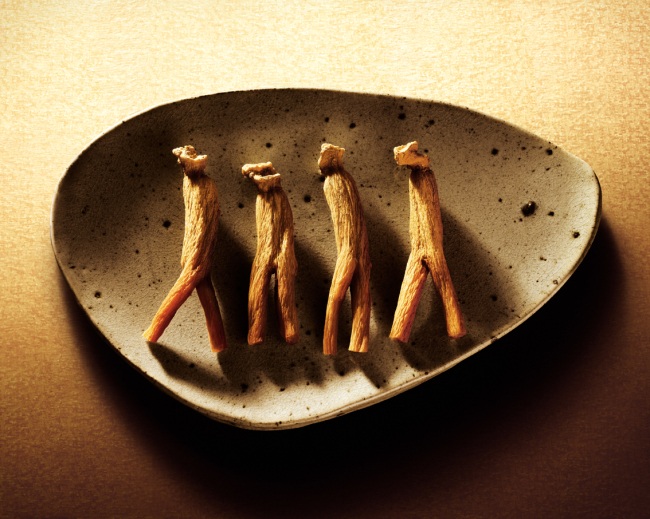 The CheongKwanJang factory run by Korea Ginseng Corp. has stood in its current location since 1978. A spokesperson from KGC describes it as a “part of the city’s identity” as Buyeo is an icon of one of Korea’s most recognizable brands and beloved health products.

It’s an interesting walk through the factory, not least because most of its employees are middle-aged women. Their average age is 45, according to Moon Ho-eun, the factory director.

Hired from the surrounding Buyeo area, many of these women spend their entire career with KGC, naturally becoming experts in red ginseng. “The city’s residents say they envy those who get to work here,” says Moon.

Although KGC makes a slew of ginseng products such as drinkable extracts, tablets, and full roots under its CheongKwanJang brand, its most prized product is “cheonsam,” which translates to “heaven-grade roots.”


Cheonsam: a symbol of health and wealth


Cheonsam has long been considered a representative luxury product of Korea. They were given as gifts to state guests such as President Mitterand of France in 1993, Chinese leaders Jiang Zemin and Xi Jinping in 1995 and 2014 respectively, and Queen Elizabeth II of the U.K. in 1999, during their visits.

Cheonsam, which makes up just 0.5 percent of the 8,000 tons of red ginseng processed at the KGC factory, is for ginseng enthusiasts who take a holistic approach to the value of red ginseng.

Retailing at a whopping 6.2 million won ($5,460) for a 600-gram can of the best grade, cheonsam offers it all: superior taste, flawless quality and external beauty.

In countries like China, where ginseng is a familiar medicinal ingredient, KGC’s red ginseng is prized for its health benefits such as boosting the immune system, improving memory, fighting fatigue, and improving blood circulation. Cheonsam maximizes these benefits while boasting a balanced appearance and smoother taste.

“Consumers in different countries vary in the health benefits they want most from red ginseng,” said a spokesperson for KGC. “In Chinese-speaking countries, it’s about fighting fatigue and boosting energy. In the Middle East, people know red ginseng for boosting virility and the immune system.”

The spokesperson said that KGC exports about half the cheonsam produced each year – 7000 to 8000 cans, which is far below demand.

“Sometimes, shoppers from China will come to Korea when the next batch is shipped to stores.”

Demand is no less high in Korea, where shoppers have been known to wait up to six months to buy cheonsam 10-ji, the best red ginseng money can buy.

Cheonsam can be consumed in various ways, but the recent trend is to slice the root into thin chips that are then steeped in water bottles to create tea.

The high price of CheongKwangJang-branded red ginseng has led to the creation of many imitation products, so the roots are never sold in chips. Instead, they are sliced in stores by sellers after the customer has inspected the authenticity of the product.

“Red ginseng is expensive, so we have seen people in China carrying around clear plastic bottles showing the ginseng chips floating in the tea as a mark of status,” said the KGC spokesperson.


The heaven-grade roots are produced just like the lower Earth-grade and good-grade roots, in fields that are tested, treated and contracted directly by Korea Ginseng Corp.

The soil is tested and treated for optimal quality for two years before the ginseng is planted. Once planted, it takes six years for the roots to reach their optimal nutritional value. All of KGC’s red ginseng products are made with six-year ginseng roots, resulting in an eight-year cycle for each harvest that includes seven stages of safety testing.

After drying, the red ginseng undergoes a painstaking “dehairing” and screening process. It is first screened by appearance, which is a major factor in determining its grade. The most beautiful roots are those that form a humanoid shape, with two symmetrical “legs” and a well-developed “head”.

“Since cutting the root itself to examine the inside damages its value, the tissues and their density are examined in a darkroom for maximum visibility while keeping the root whole,” said Lee Eun-sook, one of 30 screeners who works in the KGC factory’s darkroom. She has been with KGC for 31 years.

All of the screeners are required to have at least 20 years of experience with KGC and to pass a test on their knowledge about the screening process for red ginseng. This is where roots are divided into heaven, earth, and good ratings, followed by further classification by weight and thickness.

The very best cheonsam is cheonsam 10-ji, which makes up just 0.02 percent of all red ginseng.

“At first, all the roots look the same,” said Lee. “But with the proper training you begin to see how they are different, and once in a while you’ll come across a cheonsam. It’s very rewarding.”

Unlike other luxury products, cheonsam cannot be controlled in terms of the amount that is produced each year. As cheonsam is found rather than created, its rarity is even more valuable, according to KGC.

“Since cheonsam is not a luxury product that is mass-produced in a factory, its value always remains high,” said a spokesman. “We are seeing more people seeking out cheonsam both at home and around the world.”