He holds a majority of stocks in AmorePacific Group, the cosmetics-focused group’s holding company. The firm then directly controls 10 subsidiaries with a vast majority of shares. The affiliate companies hold no equity stakes in each other.
The only exception is AmorePacific, the group’s crown jewel that sells the premium brand Sulwhasoo and one of the group’s only two publicly traded firms. The parent firm’s stake in the unit is smallest -- but enough to secure management control -- at 32.2 percent, supplemented by the chairman’s personal holding of 9 percent.

The tycoons of the country’s top 10 family-run conglomerates, including Lee Kun-hee of Samsung and Chung Mong-koo of Hyundai Motor, control their empire with an average equity stake of just 0.9 percent, the Fair Trade Commission recently revealed.

Suh also earns praise for never having strayed from his strategic focus on the cosmetics business, while most of his chaebol peers gave in to the lure of empire building, expanding their business into a vast spectrum of seemingly irrelevant industries.
This clear and unyielding focus on cosmetics -- which traces back to the company’s roots in 1932 when Suh’s grandmother opened a small cosmetics shop --is what made him and his AmorePacific so successful, experts say.

“A key characteristic of the AmorePacific Group is that its key cosmetics brands such as Etude and Innisfree are incorporated as subsidiary companies,” noted Regina Hahm, an analyst at Mirae Asset Daewoo Securities.

Subsidiaries Etude, Innisfree, eSpoir and Cosvision are all cosmetics makers, while Amos Professional produces hair products. Pacificglas and Pacific Package engage in cosmetics packaging and design, while Aestura focuses on medical skincare. Osulloc is a green tea brand that AmorePacific has cherished as part of its history since 1979.

Even with the tidy ownership setup and a streamlined business portfolio, the group is not without its problems, say corporate governance experts.

In fact, corporate governance scores given to the group’s two listed firms are not any better than other chaebol groups.

The Korea Corporate Governance Service gives AmorePacific Group a rating of “C,” the second lowest on its seven-level ratings scale. It places AmorePacific a notch up at “B.” It refused to disclose the reasons behind the appraisals.

The Institutional Investor Services, a global proxy advisor, placed AmorePacific Group at the very bottom of its one to 10 scale, citing poor scores in the quality of its board, shareholder rights and audit-and-risk oversight.

AmorePacific is rated higher at level seven, but its weakness is in the same areas -- its board quality and shareholder rights.

They question whether the boards, whose independent directors do not look quite independent, are able to serve their role of checks and balances of the management and protect the rights of shareholders.

The AmorePacific Group’s six-member board has three independent directors. Two are former executives of affiliate companies, while the remaining one -- an economics professor at Yonsei University, Suh’s alma mater -- attended the same school with the chairman at the same time. The three form the company’s audit committee. 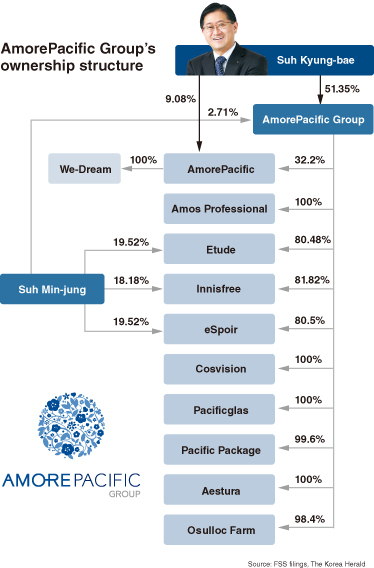 “The independence of ‘independent directors’ is very questionable,” said a spokesperson for the Center for Good Corporate Governance.

Other alumni of Suh’s Yonsei University can also be found on the AmorePacific board.

Its eight seats are currently filled by three inside directors -- including Suh and the company’s CEO -- and five independent directors. One of the five attended Yonsei at the same time as Suh. Another independent member has held the position since 2009. Critics say directors serving on boards for long periods of time may lack independence.

“When the controlling shareholders have substantially large stakes, as is the case with AmorePacific group, the rights of minority shareholders are considered to be at risk of being abused,” said Ahn Sang-hee, a corporate governance expert at Daishin Economic Research Institute.

It is ever more important for such companies to have independent directors who are really independent and free to differ from a decision of the majority, he said.

At AmorePacific Group’s general shareholder meeting last year, six institutional shareholders, including the National Pension Service, had opposed the appointments of the questionable directors. Nevertheless, the company pushed ahead, saying they were legally eligible.

Korean law stipulates that those who currently work, or at any time during the previous two years of their appointment worked at a company, are not eligible to serve as its independent directors.

A weak system of checks and balances to keep Suh in check does not seem to be a major turn-off for investors, as long as the company turns in stellar results like it has in the past year, a stock analyst said on condition of anonymity.

Also, it is a known risk to them that AmorePacific is entirely under Suh’s control.

“The company is registering spectacular growth, which is proof the chairman is doing it right at least at this point of time. Any corporate governance risk seems to be dwarfed by its growth prospects,” he said.