Lee Dae-ho of the Seattle Mariners has hit his 12th home run of the season against the Houston Astros.

Lee belted a solo shot off the Astros starter Mike Fiers in the top of the fourth at Minute Maid Park in Houston on Wednesday (local time). It was part of the Mariners' four-run inning, cutting the deficit to 5-4. 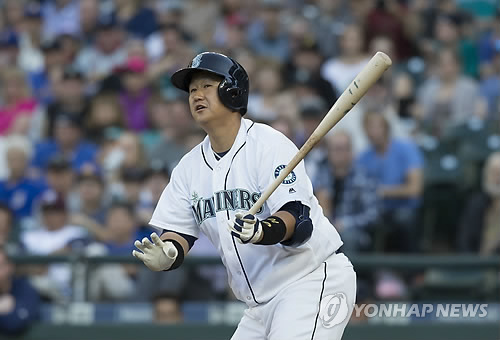 He is tied with Park Byung-ho of the Minnesota Twins for most home runs by a South Korean player this season. Park, mired in an extended slump, was sent down to Triple-A Rochester on Friday.

The home run was Lee's only hit in five at-bats, and the Mariners lost 9-8. Lee is batting .291 and has 37 RBIs to go along with a dozen home runs.

Lee, who'd starred in Korea and Japan before moving over to Seattle, began his first big league season in a platoon with veteran Adam Lind. Lee, who bats right-handed, got the bulk of the starts against left-handers, while Lind, who's left-handed, played mostly against right-handers.

Lee has been a far more productive hitter than Lind despite getting limited opportunities, and manager Scott Servais has found a way to insert both players into his lineups lately. Lee has made 13 consecutive starts.

Elsewhere in the majors, Kang Jung-ho of the Pittsburgh Pirates, who's being investigated over a sexual assault allegation in Chicago, delivered a key hit against the St. Louis Cardinals in St. Louis.

With the Pirates trailing 5-4 in the seventh with men at the corners, Kang delivered a go-ahead, two-run double to right-center.

He later scored on an error by shortstop Aledmys Diaz, making it 7-5 Pirates.

In the top of the ninth, Kang faced the Cardinals' Korean reliever Oh Seung-hwan for the second time this season. Kang flied out to right and ended the day 1-for-4 with two RBIs and two runs scored.

Oh, who has picked up two saves after All-Star closer Trevor Rosenthal lost his job, came on in a non-save situation. He struck out one in one perfect inning to lower his ERA from 1.71 to 1.67.

The Pirates held on to win 7-5 and zipped past the Cardinals to take second place in the National League Central at 44-41, 8.5 games behind the Chicago Cubs.

In Los Angeles, Kim Hyun-soo of the Baltimore Orioles went 2-for-7, as they defeated the Dodgers 6-4 in 14 innings. It was Kim's 14th multihit game of the season. He's batting .336.

Another Korean in the majors, Texas Rangers outfielder Choo Shin-soo, was held out of the lineup Wednesday with a lower back injury. (Yonhap)