On Monday, Coway posted an official apology on its website regarding the controversy. The statement said that the company had found that if the nickel coating on its products’ tubes had worn off, nickel might have been mixed with the ice and water produced. 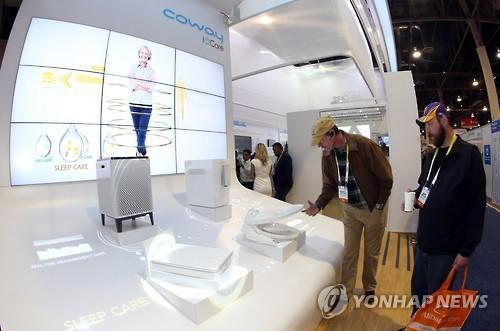 “After ascertaining that the substance we found was nickel, Coway confirmed that the amounts of nickel that could be found in the water were not harmful to the human body, through careful study, including advice from outside specialists,” Coway said.

Nickel is a common substance used to coat faucets, teapots and other household products. It also naturally occurs in food such as nuts and green tea. The amount discovered in Coway’s study of its products was less than one-tenth of the health advisory level for nickel set by the U.S. Environmental Protection Agency.

However, Coway had still concealed the fact from consumers for a year, as the defect was first found in July last year when the company started receiving customer complaints.

In its statement, Coway said that it had replaced 97 percent of the problematic parts in the related 87,000 rental products. This had been done over the past year without telling consumers about the problem.

Coway has offered to replace all three models of the product free of charge, or to cancel rental subscriptions without penalty fees. However, the statement released by the company did not apologize for failing to notify consumers earlier about the nickel.

A spokesman for Coway could not be reached by phone in time for this article.

The public has responded in outrage, as the revelation comes soon after widespread shock concerning harmful substances in other widely used household products such as the toxic dehumidifier sterilizer from Oxy Reckitt-Benckiser and air purifier filters from 3M.

In particular, Coway’s explanation that the level of nickel detected was not considered dangerous is a familiar echo of statements by Oxy Reckitt-Benckiser, which were later found to have been false.

According to local reports, the Korean Agency for Technology and Standards said that it will be investigating the Coway products, in conjunction with the Ministry of Environment.