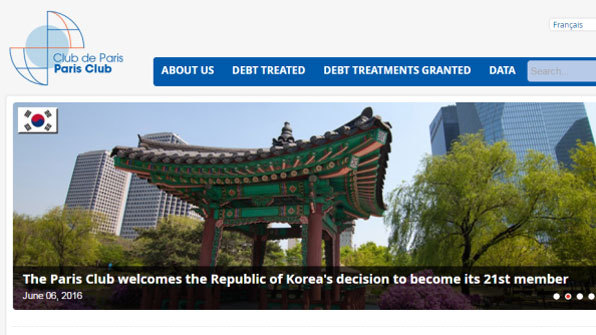 South Korea joined the so-called Paris Club as its 21st member country on Friday, the finance ministry here said, a step that acknowledges the country's transition into a creditor country.

The membership was endorsed at the club's meeting to celebrate its 60th anniversary in Paris, according to the Ministry of Strategy and Finance.

The Paris Club is an association of creditor countries with the major aim of finding sustainable solutions to payment difficulties faced by debtor countries.


The ministry said South Korea has become the 21st member along with the United States, Japan and Germany, as Asia's fourth-largest economy has come to be regarded as a creditor country on the world stage.

"South Korea, one of the world's poorest countries in the 1950s, has achieved rapid economic growth after overcoming its painful history. It has become the first emerging economy to join the Paris Club," Choi said in a speech at the ceremony.

The Seoul government expressed its will to join the organization in a summit meeting between South Korean President Park Geun-hye and her French counterpart Francois Hollande held in Paris on June 3. France is the incumbent chair country of the Paris Club. (Yonhap)