By 이현정
Published : Jun 4, 2016 - 11:12       Updated : Jun 7, 2016 - 09:37
South Korea's top 10 conglomerates have suffered a drop in their market capitalization this year as a protracted slump in domestic and overseas markets continued prodding investors to take to the sidelines, data showed on Saturday.

According to the data compiled by industry tracker FnGuide, the combined market value of Samsung, Hyundai and eight other business groups stood at 633.91 trillion won (US$534 billion) as of Friday, down 10.94 trillion won, or 1.7 percent, from the end of last year. 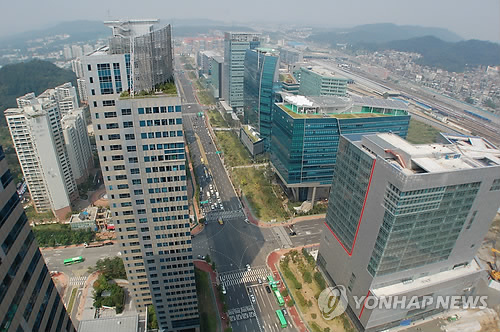 No. 1 conglomerate Samsung Group suffered a 1.86-percent drop in its market capitalization, the sharpest decline among others, at 296.92 trillion won over the cited period.

Over the one-month period, however, Samsung enjoyed a 3.89 percent rise in its market capitalization on the back of a rally in its flagship Samsung Electronics Co.

But most other conglomerates saw their market cap dwindle for the past month, with Hyundai Motor suffering the largest loss of 4.79 trillion won. Lotte Group also suffered a loss of 2.89 trillion won, followed by POSCO with 2.36 trillion won and LG with 2.13 trillion won, the data showed. (Yonhap)