Korea's beer companies are competing to supply their products to Chinese tourists whose latest trend is to come here in the thousands and enjoy food parties together.

Hite Jinro supplied 4,000 cans of beer to the 4,500 Chinese employees of Chinese beauty group Aolan, who had come to Korea on a reward trip and gathered in Incheon, a port city west of Seoul, on March 28 for a party. It will again be the provider of beer when some 8,000 employees from Zhongmai Group, a Chinese health care company, hold two separate parties in the capital city on May 6 and 10. 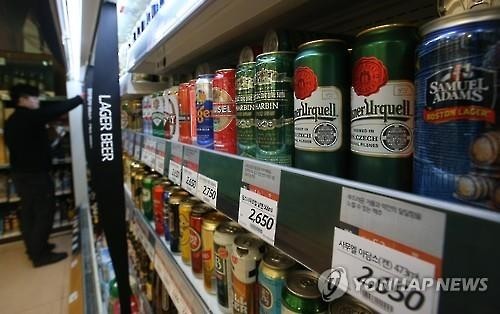 The trend started with a single line from a Korean drama aired in early 2014, a mega hit in China, in which the leading female star orders fried chicken and washes it down with beer, calling it a perfect combination on a rainy day. The two items have turned into the portmanteau "chimaek," which is the combination of chicken and maekju (beer in Korean).

Hite Jinro is adding extra to the parties by using Song Joong-ki, the lead actor in the recently concluded drama "Descendants of the Sun," another hit success in China, in advertisements and inviting Gummy, who sang on the drama's OST.

The visitors from Zhongmai opted for "samgyetang," a traditional Korean dish of boiled chicken soup, instead of fried chicken, allowing room for Kooksoondang, the maker of the popular rice wine Bekseju, to debut its product. The company will place 1,800 bottles of the rice wine, currently being exported to China, on the party table for the tourists.

Although not for Chinese customers only, Oriental Brewery  is again the sole supplier of beer to the Daegu Chimac Festival opening in the southeastern city of Daegu on July 27-31. The event, the second of its kind, is expected to draw a large number of foreigners.

"It has become extremely important to find out when and where these Chinese reward trips are taking place," a businessman in the beer business said. "Not only is it important to obtain the information first, it is important to keep it a secret that we are making contact to be the supplier for the events." (Yonhap)