Korea enacted the Employee Retirement Benefit Security Act in 2005 to allow companies to set up an external fund for retirement plans as an alternative to the previously popular severance pay system. 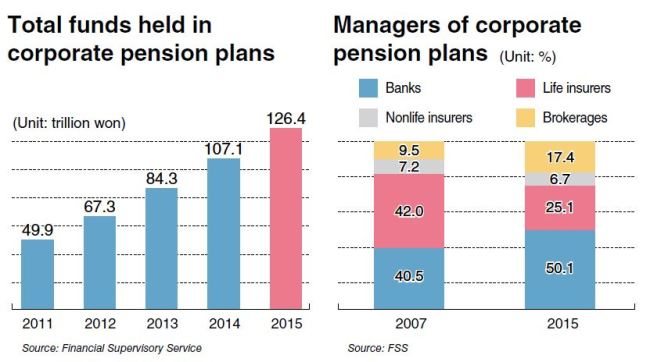 The need for corporate pension plans has become more evident as the public pension, National Pension Fund, is projected to decrease from a peak of 2,561 trillion won ($2.24 trillion) in 2043 and completely dry up by 2060.

The total size of accumulated funds for corporate pension plans at banks, insurers and brokerages surged to 126.4 trillion won or 8 percent of Korea’s gross domestic product in 2015 from 49.9 trillion won in 2011, according to data by the Financial Supervisory Service.

However, an expert noted that 93 percent of the subscribers of corporate pension plans take out their pension in a lump sum, rather than in monthly payments, being exposed to the risk of using the money too fast.

“The purpose for adoption of the retirement pension scheme was to secure stable monthly income after retirement but this trend runs counter to its purpose,” said Seong In-mo, head of the wealth management support department at the Korea Financial Investment Association.

“Korea needs to adopt measures to encourage receiving the pension in monthly payments rather than in a lump sum,” he said.

To encourage taking pension in monthly payments, he suggested the Korean government put a limit on the maximum proportion of the lump sum that can be withdrawn.

He took the example of U.K., which until last year had put a 25-percent cap on the amount of a tax-free lump sum that retirees can take out of their retirement pension. Although the cap has been scrapped, such a system is still worth adopting in Korea, Seong said.

According to FSS data, an average annual return rate of funds under corporate pension plans managed by Korean banks from 2011 to 2015 stood at 2.5 percent.

The number is dwarfed by 9.5 percent annual return rate of retirement pensions managed in Australia during the same period under the Association of Superannuation Funds of Australia.

Local managers of retirement pensions have not been able to yield high returns due to heavy allocation of the funds to principal-protected investment vehicles, noted Nam Chae-woo, a research fellow at the Korea Capital Market Institute.

To better protect pension money for ordinary employees, who find it difficult to make timely investment decisions during market fluctuations, Korea should adopt a default option system in which newly hired workers automatically enroll for corporate pension plans unless they opt out, Nam said.

Default options were adopted in advanced markets including the U.S., Sweden, the U.K. and Australia. They usually come in the form of long-term life cycle funds or target-date funds which provide a mix of stocks and bonds based on the investor’s age and planned retirement date. Fund managers increase the proportion of bonds and reduce that of stocks as the investor ages.

“An important premise for adopting the default option is that it should be provided mainly for the socially vulnerable hired at small and medium-sized companies because retirement pensions are supposed to secure stable income after retirement,” Nam said.

About 5.9 million, or 53.5 percent of regular employees, subscribed to retirement pensions as of the end of 2015, according to FSS data. Among them, 84.4 percent were workers at companies with more than 300 employees.