No Man is an Island’ brings religious extremes face to face

“No Man is an Island” is a drama that follows a leader from a Korean cult to the southern Philippines, where he finds himself prey to Abu Sayyaf terrorists who hold him hostage.

But according to Ang, the cults he used as inspiration for the film are quite predatory themselves.

“The most troubling thing is that they use fraud ‘religion’ not only to gain money but to molest their members, mostly leading to what they justified as unforced sexual interactions between the willing members of their church,” said Ang.

“It’s an exposition of how they lured their victims into their ‘heavenly world’ of salvation; how they prey on innocent children and poverty stricken provinces.”

The movie was filmed in a single take, which was an added challenge.

“We did rehearsals before filming because if we had a single mistake, we would have to restart shooting from the beginning again,” said Ang.

He said the Filipino and Korean actors had theater backgrounds, which helped them adapt to this kind of production.

The story is fiction, but Ang has based it on real groups, consulting his team member who grew up in the area where Abu Sayyaf, which is linked to the Islamic State group, is active. 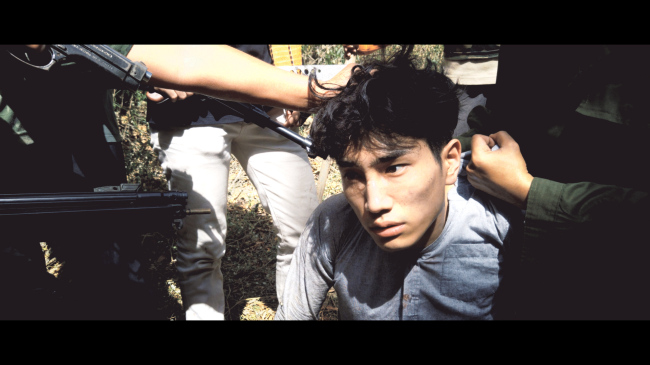 On the Korean side, Ang said he had been recruited by cults as part of research for another film.

“I knew already what they were, but as a documentary filmmaker, I just voluntarily let them recruit me and experienced attending some events to observe what’s really happening in there,” he said.

Ang said he had planned to make a documentary film about the cults, but later decided against it.

While he emphasizes the cult in the film is not meant to be one of those he joined, he said he used his experiences to help him depict cult behavior.

“My personal experiences are my inspiration to make this story of ‘No Man is an Island,’ but just an inspiration ... this film doesn’t depict any particular cult in Korea.”

The film is the third in a series of five short films that explores Elisabeth Kubler-Ross’ five stages of grief – denial, anger, bargaining, depression and acceptance -- in the context of modern Korean society.

The first, titled “Rich Dead, Poor Dead,” deals with capitalism, corruption and politics, according to Ang. The second one, “The Saviour,” was screened in February at the Singkwentro Film Festival in the Philippines, where it won a best actor award and two honorable mentions.

The preview screening for “No Man is an Island” will take place on Saturday at 2 p.m. at Salad Multicultural Theater in Yeongdeungpo, Seoul. For more details please contact Salad Boom at 02-2254 0417.