By 박형기
Published : Apr 20, 2016 - 14:41       Updated : Apr 20, 2016 - 15:04
With no suitable or attractive assets to invest in amid low interest rates, the market is seeing more and more investors parking their money -- mostly savings -- into stock or mutual trust accounts offered by brokerages rather than banks’ savings accounts. 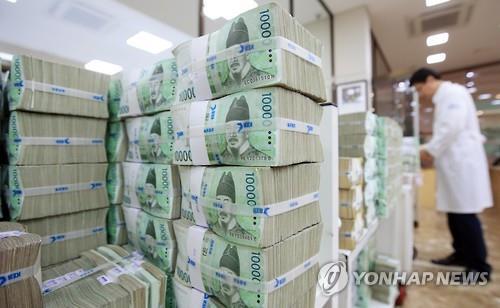 At the same time, the outstanding balance of retail borrowings for stock trading soared back to around 7 trillion won on expectations of shares rallying further driven by demand for higher returns, according to the Korea Financial Investment Association.

“There aren’t many investment products out there nowadays, perhaps other than individual savings accounts or pension funds, that can help people gain better returns for their future or retirement,” said an industry source.

“CMAs and funds investing in baskets of equities or high-graded bonds can be attractive without having to worry about losing a lot of money, although principals in those investment types are not guaranteed,” according to the source.

Stock accounts with deposits invest in commercial papers, bonds issued by public enterprises, short-term instruments and shares of companies with sound fundamentals, which has made them popular since their introduction in the market about a decade ago, especially among salaried workers. Those accounts enable subscribers to pay their monthly utility bills via automatic transactions on relaxed regulations.

Margin trading on borrowed money with low interest rates reached a record as well, after a sharp decline to some 6 trillion won early this year from almost 9 trillion won a year ago. Borrowed funds have been mostly flowing into the tech-heavy KOSDAQ shares.

With funds -- borrowed or from personal savings -- moving into stocks, the Korean stock market saw its benchmark KOSPI surpass 2,000 points last week, despite forecasts of slower growth this year, with the manufacturing industry losing luster in exports on weaker global demand.

The Bank of Korea lowered its growth projection to 2.8 percent from 3 percent, following the International Monetary Fund’s 2.7 percent down from 3.2 percent on the back of a weaker global economy stemming from rising debt and aging society in developed economies.

The benchmark KOSPI edged past the 2,000 mark a week ago driven by net foreign buys, but analysts cautioned that stocks will bound to face corrections and volatility with the U.S. Federal Reserve gearing up for a rate rise later this year.

“Stocks could further rise until the end of this month, with the possibility of volatility increasing around the Federal Open Market Committee meeting next week when the Fed can signal a rate rise later this year,” said Kwak Hyun-soo, an analyst at Shinhan Investment.

Historical data showed that Korea's stock market has suffered in May since 2010, beginning with economies of Greece, Ireland, Italy, Portugal and Spain facing debt crises six years ago, followed by growing concerns over U.S. quantitative easing program coming to an end in 2011, then Greece’s debt default a year after with a signal of ending near-zero interest rates from then-Fed chairman Ben Bernanke in 2013.