Despite the company’s denial, Samsung’s shipbuilding arm emerges as a strong candidate to take over DSME

The sense of crisis over idling shipyards is on the rise this year as the number of shipbuilding orders won by the top three shipbuilders in the first three months of this year hit a record low of nine cases. 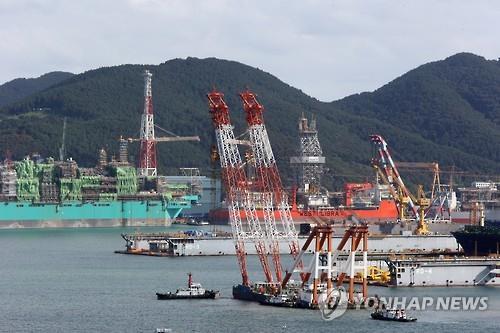 The scenario of a merger deal between SHI and DSME was panned early this month in a report by TradeWinds, a global shipbuilding industry news source.

The news report with the title of “Seoul in push to merge SHI and DSME” came after a presentation by former Strategy and Finance Minister Yoon Jeung-hyun on the need for integration among major Korean shipbuilders to stay afloat of the industry.

During a special lecture to employees at the Financial Supervisory Service on March 31, Yoon claimed that the number of major shipbuilders needs to be scaled down to one or two companies, pointing out the worsening overcapacity issue in the industry.

He did not mention specific corporate names for a merger deal, but there is no doubt that SHI and DSME could be a target of the deal.

Regardless of the recent news report and Yoon’s remark, the Korean government has long been looking for a Korean candidate to take over the 31.5 percent stake that state-run Korea Development Bank has in the faltering DSME.

In the past, it had looked to industrial giants, including POSCO, SK and Hanwha, for a deal, but those conglomerates had turned down the offer as the deal cost requires a multi-trillion won sum.

The latest candidate for the DSME acquisition, Samsung Heavy, also said the speculation is groundless.

Despite the denial of Samsung, industry insiders said Samsung could review the deal at the group level as it puts its top priority on cutting costs in the course of power transfer to Samsung Electronics vice chairman Lee Jae-yong.

“Samsung could inject capital for the deal in return for the government’s support in the succession process,” an industry source said.

As TradeWinds pointed out, the merger of Samsung over DSME can also be attractive in terms of business.

With the merger, Samsung can advance into the world’s largest shipbuilder, pushing Hyundai Heavy Industries down to the second spot. The yards of the two shipbuilders, both of which are located in Geoje, South Gyeongsang Province, would enable Samsung to secure postmerger integration. Their business portfolio is also complementary with little overlap, the source added.