ArcelorMittal USA and two other American steel companies have filed antidumping and countervailing duty petitions against cut-to-length carbon-quality steel plate makers from South Korea, Austria, China, Brazil and eight other countries, according to the Washington office of the Korea International Trade Association. 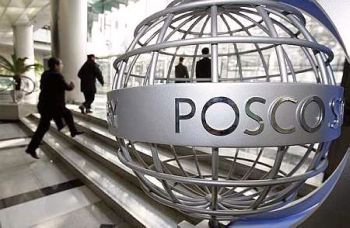 The petitions, lodged with the U.S. International Trade Commission and the Department of Commerce, claim that South Korean companies sold their products at below-market prices in the U.S. on the back of illegal subsidies, hurting the American industry.

The U.S. steelmakers demand that antidumping duties of up to 244.1 percent be imposed on imports of South Korean cut-to-length carbon-quality steel plates, the KITA office said.

Chinese and Brazilian steelmakers have also been accused of both dumping and illegal subsidies, while only antidumping complaints have been lodged against steelmakers of Austria and eight other countries, according to the KITA office.

Antidumping duties are designed to offset the amount by which a product is sold at below-market value, while countervailing duties are intended to neutralize unfair subsidies.

The U.S. department will determine whether to initiate antidumping and countervailing duty investigations within 20 days.

The commission should reach a preliminary determination in the antidumping and countervailing duty investigations in 45 days.

Last month, the department made a preliminary ruling on a separate case involving alleged illegal state subsidies for South Korean makers of cut-to-length carbon-quality steel plate, hinting that it may not hand down countervailing duties.

It ruled that cut-to-length carbon-quality steel plate made by Hyundai Steel Co. and POSCO are sold in the U.S. below the “de minimis” or minimal margin of 1 percent. If the subsidy rates prove to be below the de minimis margin in its final decision scheduled for May, no countervailing duties will be imposed on the South Korean products. (Yonhap)