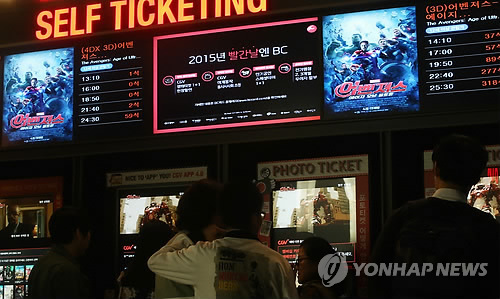 He attributed the growth to its Chinese subsidiary which is expected to log a record-high operating profit of 2.6 billion won in the January to March period.

‘In the domestic market, the company’s earnings will be pulled down by a drop in number of viewers and ticket price diversification, but its Chinese business will show high growth,” he said.

Another analyst Hwang Sung-jin at HMC Investment Securities also said that robust growth of the Chinese movie market will provide a supportive backdrop to the cinema operator to generate revenue.

CJ CGV is currently the No. 7 operator in terms of ticket sales in China, with 514 screens at 64 theaters nationwide.

Sales of the theater chain in Korea is expected to increase 2.3 percent on-year to 208.8 billion won while its quarterly operating profit may be almost halved to 12.1 billion won, Hwang said.

Hwang added that other overseas business including its recent deal to buy Turkey’s Mars Cinema for $800 million will create positive momentum for the firm.

“It is expected to generate stable revenue from the Vietnamese market. The acquisition of Turkey’s Mars Entertainment seems to be a right choice to become a global multiplex operator,” he said.