Some believe it will boost transparency of stock market by providing retail investors fresh information about the volume and velocity of negative bets placed against companies. But others say short selling’s benefits, including market liquidity and pricing efficiency, will be hampered. 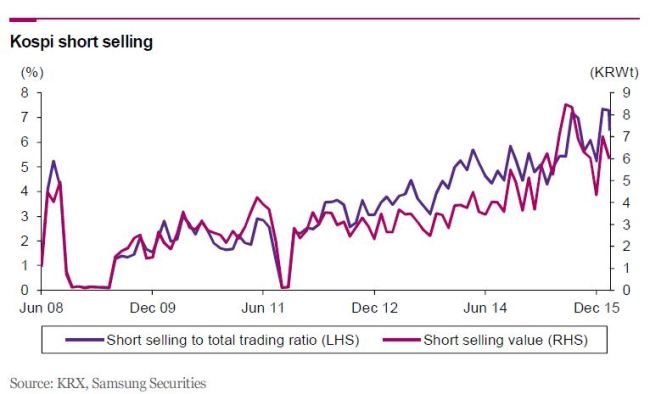 From the second half of this year, the Financial Services Commission is expected to impose a disclosure requirement which obliges investors to publicly reveal their short positions once they reach 0.5 percent of a company’s share capital, or over 1 billion won ($867,000).

Short selling is a legitimate stock trading strategy but it has been widely blamed for market volatility and disruption.

The move comes as concerns over short selling abuses have mounted after the country doubled the limit on stock price rallies from 15 percent to 30 percent last year.

“For small individual investors who have limited access to short selling, the short position reports can become an investment reference,” he said.

Short sellers, mainly institutional and foreign investors, sell stocks they do not own, hoping to profit by buying it back at a lower price later. Retail investors are allowed to short stocks here but securities firms seldom lend stocks to them due to their lack of credibility.

A growing size of short selling in the stock market was one of the reasons behind the adoption of the rule.

Short selling exceeded 7 percent of the Korea Exchange’s combined trading value at the end of 2015, up from 4.1 percent in 2013.

“I think it’s a positive move. Some short sellers request anonymity for the sake of market efficiency but there is also a possibility that they can manipulate the market,” he said

Opponents of the introduction of the new rule said the practice helps to improve market liquidity and price formation and the regulation will hinder the positive purpose.

Wealth management firms, especially, claim that the disclosure requirement will take a toll on their business as their investment strategy will be exposed to everyone.

“Disclosure can encourage copycat investing. If everyone knows what my positions are, then they can go ahead and essentially mimic them,” a fund manager in Seoul said.

“It’s not advisable to devalue the positive functions that short selling has,” he said.

“While enhancing effectiveness of information disclosure, the financial authorities need to ease the burden on investors of exposing their investment tactics by guaranteeing anonymity.”

Currently, EU and Japan require the disclosure of the short selling balance of an individual stock.