The Korea Herald is publishing a series of articles looking at the performance of various sectors on Korea’s main bourse, the KOSPI. The following is the sixth installment. -- Ed.

But that may have been only a brief rebound, analysts said, as uncertainties stemming from low interest rates, volatile foreign exchange rate and stock market will keep weighing on the lenders. 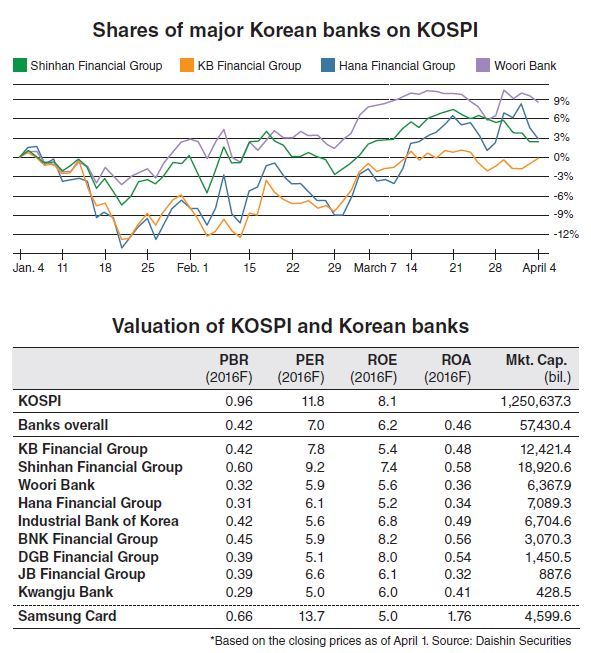 Shares of the local banks rose 0.4 percent on average during the trading week of March 28 to April 1, outperforming the KOSPI’s 0.5 percent decline.

One noticeable performer was BNK Financial Group which spiked 5.5 percent during the same week, the largest gain in the banking sector.

Analysts attributed the banks’ overall weekly gain to the March 30 decision by the Financial Services Commission to set the countercyclical capital buffer rate at zero percent.

Countercyclical capital buffer is designed to smooth peaks and troughs of economic conditions, when banks tend to boost lending in economic expansion and slash it in recession. Setting the buffer at zero percent means banks do not have to raise more capital.

“The decision to set the buffer at zero percent bodes well for investor sentiment toward banks,” said Heather Kang, an analyst at Mirae Asset Securities.

“Uncertainties over the buffer had raised concerns that banks and financial holding companies may need to raise additional capital. The decision not to build a buffer has lowered such risks sharply.”

The won hit its strongest mark this year at 1,143.5 won against the greenback on Thursday.

Moreover, the local lenders’ average price-to-book ratio -- used to compare a stock’s current market price to its book value -- remains low at 0.42, meaning they are largely undervalued, he said. The average PBR of the U.S. banks is 0.86.

Such positive factors, however, will not be large enough to turn the tide of unfavorable macroeconomic conditions such as low interest rates, analysts noted.

Local banks have suffered a shrinking interest income over the decade.

While over 90 percent of their total profits depend on interest income, the average net interest margin of the banking sector has continued to slide to 1.87 percent in 2015 from 2.58 percent in 2011.

“Banks are still struggling with low interest income. Their revenues from selling nonbanking products such as bancassurance or equity funds are falling,” said Kim Hye-mi, researcher at the Hana Institute of Finance.

“They have less room to increase loan growth, since the financial authorities have enhanced regulation on lending to households from February. The overall conditions for banks will not improve, compared to last year,” she said.

Lenders also face higher risks of growth in credit costs from the default of corporate loans, with the top regulator repeatedly stressing corporate restructuring in the struggling industries such as shipbuilding and shipping.

KB Financial, the preferred bidder for a controlling stake in Hyundai Securities, has the strongest potential to enhance nonbanking brokerage business, an area that requires a large buffer in raising capital ratio, said Park Sun-ho, analyst at Meritz Securities.

Daishin’s Choi chose Shinhan Financial as a preferred stock for this week, saying the bank’s profits will be “decent” in the first quarter, and may hover over 700 billion won ($610 million) in the second quarter, buttressed by the planned sale of its 12.48 percent stake in Ssangyong Cement.

First-quarter earnings reports are set to be released April 20 for Shinhan, April 21 for KB and Woori, April 22 for Hana and April 29 for IBK and Samsung Card.