Calling it a future growth strategy, the Ministry of Agriculture, Food and Rural Affairs said it aims to increase the size of the nation’s insect market to 500 billion won ($436 million) by 2020 from 303 billion won in 2015. 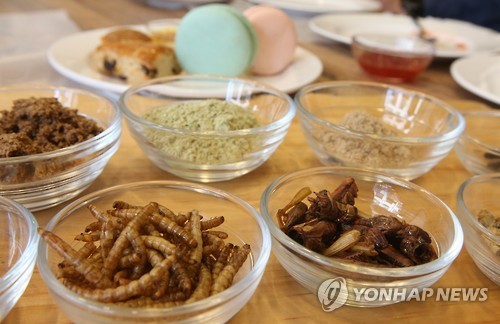 To enhance the quality of products and expand distribution channels, the government will encourage farmers to establish regional networks and forge partnerships with state-run institutes tasked to industrialize the sector. The government is currently running such centers in South and North Gyeongsang Provinces, with two more planned next year in Daejeon and Gyeonggi Province.

“The networks of farmers will help to build a reliable distribution channel through which customers get products in reasonable price,” Kang Sun-rye, a ministry official said.

The measures are the second in a series of the government’s long-term plans after a special law was legislated on the insect industry in 2010.

The government sees the insect industry as a promising sector that can generate new income sources for farmers, citing growing demand.

The size of the edible-insect market, for instance, is currently worth 10 billion won, which is small compared to the U.S and Europe. But the sector is growing fast in line with changing perception toward insects as good ingredients for high-protein and low-calorie food.

Edible insects designated by the government include grasshoppers, pupa, grub and crickets.

The government also plans to shift the focus of the industry from educational use to medical, cosmetics and animal feed.

Insects for educational use accounts for more than 60 percent of the market and they are traded at local government events, the ministry said, stressing the need to diversify the use of insects in the areas of food, environment protection and medicine.

In collaboration with trade promotion agencies, including KOTRA and KOPIA, the ministry also plans to provide information on overseas markets, quarantine procedures and hygiene standards.