NH Investments and Securities forecast the company’s operating profits will soar to 21.6 billion won this year, up 43.5 percent from 2014, thanks to increased global interest in Korean monochromatic paintings. 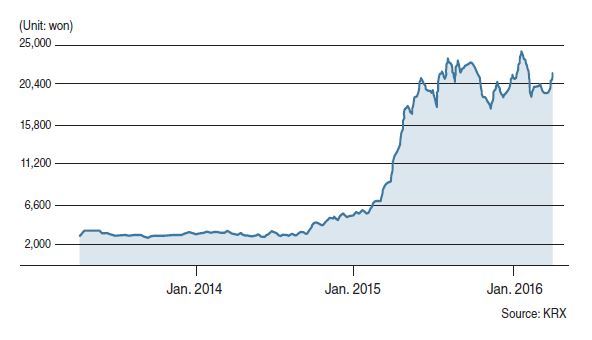 The firm’s revenue is also expected to jump to 71.9 billion won this year, a 31.3 percent increase from a year ago.

“Traditional Korean artworks are steadily receiving global attention from an increasing pool of rich buyers as indicated by the company’s decision to increase auction events in Hong Kong to four times this year from three last year,” said Baek Joon-hee, an analyst of NH Investments and Securities.

Because Seoul Auction is already seeing success with its newly launched and easily accessible online auction site eBid Now in 2014 -- garnering 4.4 billion won in revenue last year -- Baek further claims that the company itself will be a target investment choice as an alternative to the previous art funds.

Funds investing in artworks gained popularity in 2007, but have since all been liquidated except for one, due to buy-and-hold strategies with long waits and low possibility of profit, as only a few select art pieces are sell at high prices.

Baek made the bold claim that investing in the auction firm is a low-risk, high-reward investment, as the price of art will continue to soar.

“Moreover, as art auctions have consistently shown profitable growth despite the sluggish economy with an annual growth rate of 13 percent, more investors are expected to invest in shares of auction firms,” he added.