The only son of Hyundai Group founder‘s 5th younger brother seeks to stand on own feet, splits from Hyundai Heavy Industries

The move was expected as Hyundai Corp. chairman Chung Mong-hyuck secured controlling stake in the company and Hyundai C&F, a wholesaler of household goods, last December through stock deals with the shipbuilder.

The shipbuilder said the deals were designed to improve its financial health. Industry watchers, however, said another key motivation of the stock trading was the power transfer of the two firms to the Hyundai Corp. chairman, a founding family member. 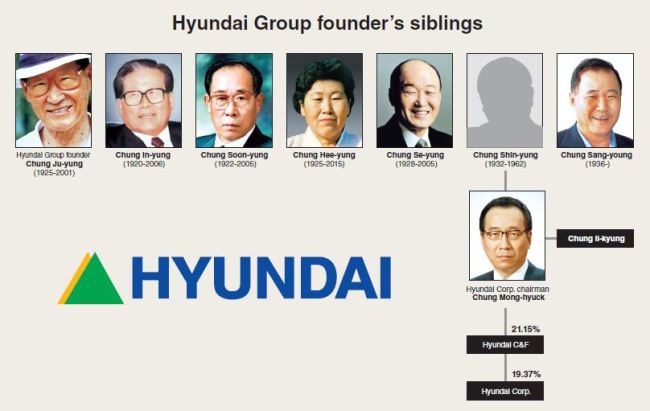 The 55-year-old chairman, who has led the board of the trading business-driven conglomerate since 2009, is the only son of the late Chung Shin-yung, the fifth younger brother of the late Hyundai Group founder.

“Hyundai’s founding family members have consistently supported Mong-hyuck, who lost his father when he was two years old,” an official from a member firm of the pan-Hyundai empire said. This is why the separation from Hyundai Heavy went smoothly without a family feud, unlike in the past, like the split of Hyundai Motor Group from Hyundai Group in 2002.

Mong-hyuck’s father died at age 30 in a car accident in Germany while he was working as a journalist for Korean daily Dong-A Ilbo.

When Mong-hyuck grew up, the late group founder gave him a chance to lead the oil business under Hyundai Group. He had been president of Hyundai Oilbank, currently under HHI, from 1993-2002. He left the company in 2002 amid a conflict with Abu Dhabi’s state-run International Petroleum Investment Co., which took over the oil refinery facing a liquidity crisis in 1999.

Following that, he remained low-key, running his own company H Avenue, a small construction materials distributor, backed by pan-Hyundai member firms, until he made a comeback to the board of a conglomerate in 2010, as chairman of Hyundai Corp.

With the completion of the split from the shipbuilder, attention in the market is being paid to whether Mong-hyuck can stand on his own two feet this time.

At the annual shareholders meeting of Hyundai Corp. last Friday, the management said the company will step up business expansion in the non-trading sectors for growth, including energy and resource development overseas, beyond its core trading business, which has been tied with pan-Hyundai family member firms.

The trading company has been engaged in the energy business from the early days of its 40-year history. Pushed by the late Hyundai Group founder, it has actively participated in the exploitation of crude oil and natural gas overseas since 1984, when it took part in Yemen’s Marib oil field with a 2.45 percent stake. As for investments in the gas field, it holds a 5.88 stake in Yemen LNG Company.