Seoul-based Hankook Tire, the world’s seventh largest tire manufacturer in terms of sales follows the growth formula in the industry by supplying its ultra-high performance tires and winter tires to BMW’s new 7-series sedans from this year. The Korean tire-maker has also supplied its premium products to other two German luxury carmakers-Mercedes-Benz and Audi--since 2013.

“Our next move (for a further leap in our core tire business) is to enter the super car market, which will help us prove our technological prowess and raising brand value in the global market,” Cho Hyun-shick, chief marketing officer of Hankook Tire, said during a press event last Tuesday. Under the name of the “2016 Hankook Tire Experience Day,” the tire-maker hosted the annual event at the BMW Driving Center, located in Incheon, last Tuesday. 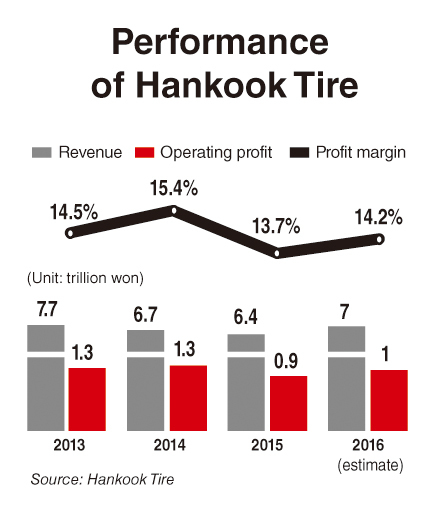 Cho, who also leads Hankook Tire Worldwide, the holding company of family-controlled Hankook Tire Group, has been responsible for marketing activities of the group’s flagship affiliate since May last year. He is the eldest son of the group chairman Cho Yang-Rai.

In his rare exposure to the media spotlight, Cho presented the company’s growth vision to evolve into a top-tier tire-maker by 2020 (in terms of market share, technology and brand value), on par with longtime market dominant players such as Michelin, Bridgestone and Continental.

“In the past, the company stood around 60 percent out of 100 compared to global top-tier players on the level of (product) quality. But the firm has caught up with those front-runners at a fast pace over the past few years. Today, I think the ratio reaches up to 80 percent,” Cho said.

Despite the upbeat outlook for future growth, the Korea tire-maker has backpedaled in size and earnings in the past three years, affected by the global economic downturn. According to company data, revenue shrank to 6.4 trillion won ($5.47 billion) last year from a peak of 7.7 trillion won in 2013. Operating profit also decreased to 0.9 trillion won from around 1.3 trillion won in the same period.

“I expect the company to draw an upward trend in performance again from this year,” Cho said, adding the firm targets 7 trillion won in revenue and 1 trillion won in operating profit.

For this, the new marketing head will bolster the tire supplies to new cars, better known as the “original equipment” market in the tire industry. The OE market is one of the top two tire businesses with “replacement equipment,” referring to market for tires fitted into cars after sales.

“The company will lift its market share in the global OE market to 10 percent by 2020 from the current 8 percent,” said Woo Byung-il, vice president of global OE division at Hankook Tire.

If the target is realized as planned, 1 in 10 new cars rolled out will be sporting tires from Hankook.

For growth in the mass market, the tire-maker will strengthen sales and marketing activities for its newly launched affordable tire brand Laufenn.

In the latter part of this year, it will raise its presence in the U.S. by completing its first U.S. plant in Clarksville, Tennessee, which will expand the company’s production capacity to 100 million tires per year.


Expansion beyond the tire business


The 2020 growth vision of Hankook Tire is not limited to the tire sector. The CEO of Hankook Tire Worldwide, who has carried out his mission to find the group’s new growth engines, said the company is eyeing one or two companies overseas for acquisition deals in the near future to expand its business into auto-related business, including the auto parts area.

“We will continue to tap new business opportunities within the boundary of the automotive industry, considering synergy effects with our core,” Cho said.

Under the leadership of Cho, the tire group already entered the auto parts sector in 2014 by acquiring a 70 percent stake in Halla Visteon Climate Control Corp., the Korean unit of U.S.-based Visteon Corp. for $3.6 billion with Hahn & Co., a leading Korean private equity fund.