“The base rate at 1.5 percent is already accommodative,” Lee told reporters in a presser that followed the central bank’s decision to freeze the rate. “It does not restrain economic growth,” he said in response to a question as to whether the key rate, currently at a record low, is higher than the optimal level for the economy to make a full recovery. 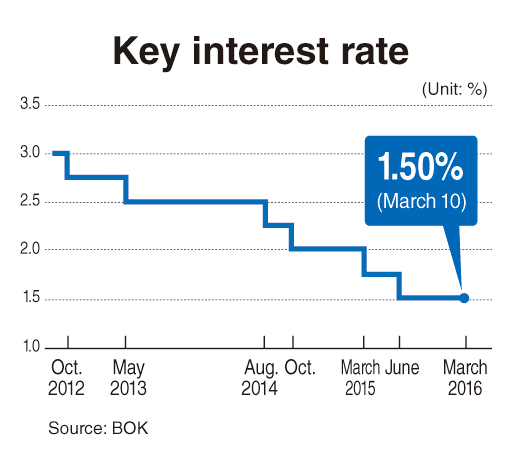 As widely expected, the BOK’s seven-member monetary policy board froze the base rate for another month, keeping it unchanged since June 2015. Ha Sung-keun was again a sole dissenter, calling for a 25 basis point cut.

Despite Lee’s hawkish remarks, experts said the BOK will have to slash the rate further -- although they vary in the timing -- in order to support the economy which has shown a worse-than-expected performance in recent months.

“The governor tried to sound neutral, but expectations of a rate cut are still solid,” Yoon Yeo-sam, an analyst at KDB Daewoo Securities said in a note. He expects a rate cut in the second half of this year.

In its monthly economic assessment report released a day earlier, the Finance Ministry said the pace of recovery has been subdued recently.

Exports, the main pillar of economic growth in Korea, continue to get pounded by global trade woes, while domestic production and consumption also slowed at home, with the index gauging consumer sentiment dipping to an eight-month low last month.

“What also became clear today is that the BOK too is seeing a rise in downside risks to the economy,” Yoon said.

In a statement that followed the rate decision, the central bank’s monetary policy board noted that Korea’s economy was continuing its recovery, but uncertainties surrounding the growth path have increased.

The BOK will release its updated economic forecasts in April, with many predicting a downward revision in its 3 percent growth projection for the whole of 2016.