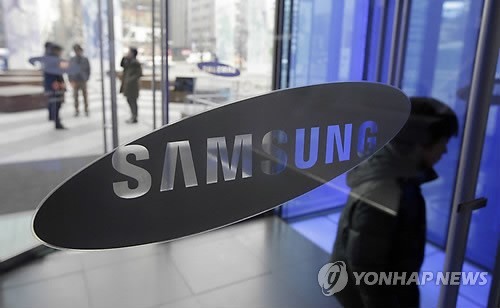 Sales advanced 1.11 percent on-year to 53.3 trillion won in the October-December period while operating profit moved up 16.15 percent over the cited period to 6.14 trillion won.

The final earnings results came in line with the guidance report released earlier this month, when Samsung estimated its fourth-quarter operating profit and sales to stand at 6.1 trillion won and 53 trillion won for the October-December period.

It marks the first time since the July-September period of 2014 for Samsung to post an on-quarter drop in operating profit.

Samsung Electronics' semiconductor business, which recently emerged as the company's main source of revenue, posted an operating profit of 2.8 trillion won in the fourth quarter, a tad higher than the 2.7 trillion won posted a year earlier.

Samsung said the sluggish growth came as the demand for PC-related products continued to fall globally, although the shipment for mobile devices and servers managed to push up the sales.

The company's IT and mobile business, which is in charge of smartphones, posted an operating profit of 2.23 trillion won in the fourth quarter, slightly rising from last year's 1.96 trillion won.

But the sector's operating profit continued to remain well below the 6.43 trillion won posted in the first quarter of 2014.

Samsung's smartphone business has been challenged by Chinese rivals, while the rising portion of budget models also ate into its profitability.

In a conference call, Samsung said it sold 97 million handsets in the October-December period, up from 95 million units a year earlier, with smartphones accounting for mid-80 percent of the total.

The consumer electronics business, however, saw its operating profit grow more than four-fold on-year to reach 820 billion won on the back of the improved sales of premium goods in the advanced countries, including the United States.

For the first quarter and on, Samsung Electronics and analysts remained conservative amid an industry-wide slump.

South Korea's 25 brokerage houses expect Samsung will post an operating profit of 5.7 trillion won in the January-March period, down from the fourth quarter amid falling seasonal demand.

"The biggest hurdle for Samsung Electronics is the slowing global chip and smartphone industry," said Lee Jae-yun, an analyst at Yuanta Securities Co. "Samsung will find troubles in expanding its sales as it already boasts strong market presence."

Samsung also said in its statement that the company may not maintain last year's performance "due to a difficult business environment and slowing IT demand."

The company also said smartphone sales will face challenges due to the slowing global market, adding it will continue to streamline its smartphone series for efficiency. It also plans to bolster sales of wearable devices, and roll out more mobile services like the Samsung Pay, its flagship payment platform.

Samsung has been making efforts in streamlining the number of low-end models and reorganized them to "A," "E" and "J" series.

Analysts, however, said the widely-expected Galaxy S7, which will be released at the Mobile World Congress in Barcelona next month, may lend support to the company's mobile earnings throughout 2016.

"After Samsung Electronics suffered damages from inventories when it rolled out the Galaxy S5, the company became more conservative in managing the production," Lee said. "This will continue for the next flagship as well."

Analysts expect the new flagship will come with a similar look to its predecessor, the Galaxy S6, as Samsung plans to cut costs and put more emphasis on improving the performances of the new device.

"The question now lies on how Samsung maintains the margins.

With the global smartphone industry expected to remain stagnant in 2016, there is no visible breakthrough which Samsung can take," Lee added.

Samsung added it will also speed up the development of flexible organic light-emitting diodes, adding the sector will rise as a new growth engine in a long-term basis.

The tech giant also said its facility investments reached 25.5 trillion won, with the chip segment accounting for 14.7 trillion won. Samsung said it has not yet finalized its investment plan for 2016.

Shares of Samsung Electronics fell 2.13 percent to 1,150,000 won as of 10:18 a.m., when the KOSPI fell 0.33 percent. The fourth-quarter results were released before the market opened Thursday. (Yonhap)