By Korea Herald
Published : Nov 23, 2015 - 20:30       Updated : Nov 23, 2015 - 20:30
Time is running short for the parliamentary ratification of the Korea-China free trade agreement by Thursday as envisioned by officials of the government and the ruling Saenuri Party. The stalemate in their discussion with opposition lawmakers on the measures to be taken before its ratification is also holding back the passage of another FTA with Vietnam, which has been remarkably expanding its share of Korea’s trade volume and overseas investments.

The main opposition New Politics Alliance for Democracy says the deal with Vietnam will be passed immediately if the ruling party and the administration agree to supplement what it sees as missing or flawed parts of the trade accord signed between Seoul and Beijing in June. 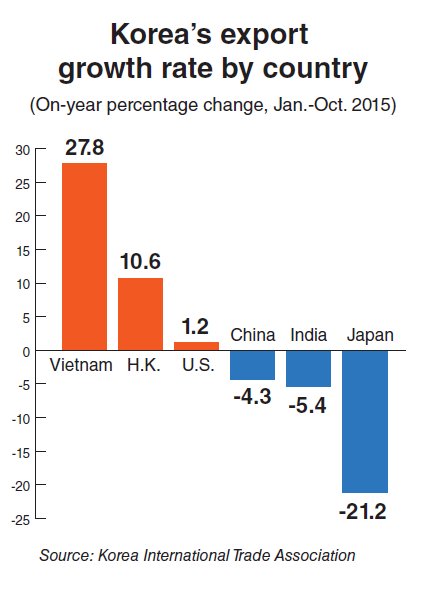 But critics indicate it makes little sense to bind the approval of the FTA with Vietnam ― over which no contentious points have been raised ― to the ratification of the deal with China.

Figures show Vietnam is becoming an increasingly important trading partner and investment destination for Korea, which has been struggling with a decreasing global demand for its products amid a prolonged downturn of the world economy.

According to data from the Korea International Trade Association, Korea’s exports to the Southeast Asian country climbed by 27.8 percent in the first 10 months of this year, while its overall shipments abroad declined by 7.6 percent over the same period. Analysts here expect Korea’s exports to Vietnam to continue to increase by double digits next year. Vietnam has already caught up with Japan as the fourth-largest overseas market for Korean companies following China, the U.S. and Hong Kong.

Separate figures from the Finance Ministry showed the country’s investment in Vietnam jumped by 51.9 percent from a year earlier in the first nine months of the year, outpacing the rate of increase in total overseas investments during the same period at 17 percent. Korea’s investments in China fell by 10.5 percent, possibly affected by the deepening slowdown in the world’s No. 2 economy.

Experts note Korean companies are set to find more business opportunities in Vietnam, with its population of 92 million ― about 60 percent of which are aged under 30. Under an economic development blueprint drawn up by the Hanoi government, its per capita gross domestic product is projected to rise from $2,096 in 2014 to somewhere between $3,670 and $3,750 in 2020.

Economists now particularly emphasize the importance of Vietnam as a trading partner to help reduce possible disadvantages Korea may face in the course of making a belated bid to join the U.S.-led Trans-Pacific Partnership trade deal concluded last month with the participation of 11 other Pacific Rim nations, including Japan. Many local manufacturing exporters are concerned that their competitiveness will be weakened ― especially against Japanese companies ― under the cumulative rules of origin stipulated in the TPP.

Heo Yoon, dean of the Graduate School of International Studies at Sogang University in Seoul, expected Japan would push to reshape current trade flows across Southeast Asia in its favor by riding on the new multilateral deal. He said the FTA with Vietnam, a founding member of the TPP, should be ratified promptly for Korea to cope with this coming wave of changes.
Some analysts caution the pace of growth in Korea’s exports to Vietnam may decelerate over the long term as an increasing number of Korean manufacturers are moving the production of intermediary goods to the Southeast Asian country. They indicate this trend will be further expedited by the Vietnamese government’s measures to require foreign companies running factories in the country to increase the proportion of locally made parts in their products.

Park Sol, a researcher at the Institute for International Trade affiliated with the KITA, suggested Korean companies need to focus on exporting more consumer goods to Vietnam, which has seen its middle class expanding in parallel with its robust economic growth in recent years. Spending by Vietnamese consumers on beverage, food and cosmetics has been increasing by more than 20 percent annually.

Korean enterprises are well placed to expand their presence in Vietnam’s growing consumer market on the back of the popularity of Korean pop culture with Vietnamese people, particularly younger generations.

“An early implementation of the FTA will help accelerate such efforts,” Park said.