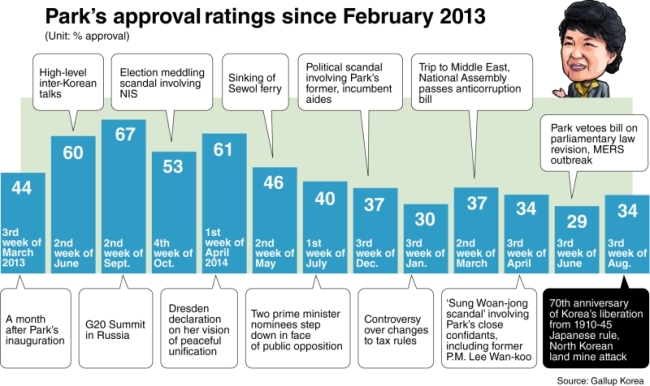 South Korean President Park Geun-hye is at a crossroads, with frustration mounting over the prospects of inter-Korean ties and the heightened security tension over North Korea’s mine attack.

As she passes the midway point of her single, five-year term Tuesday, the result of marathon negotiations by senior officials from the two Koreas could serve as a watershed moment for her presidency.

At her term’s halfway mark, Park also remains stranded on the diplomatic front, as her efforts at achieving diplomatic balance by attending events in Beijing to mark the end of World War II ran aground with Japanese premier Shinzo Abe’s last-minute announcement that he would skip the events.

Cheong Wa Dae last week said Park would visit China for the events, which many Western leaders remain reluctant to attend due to concerns that the event could further stoke the rivalry between Beijing and Japan.

Park was seen as wanting to build a stronger bilateral relationship with China on geopolitical and economic terms, and also use the events as an opportunity to press Japan to apologize for its wartime atrocities.

But Abe skipping the events has placed Park in an awkward position, as she won’t be able to send that message if without Abe’s attendance, while Abe’s absence would highlight Japan’s alliance with China’s rival, the U.S.

Park is at a very critical point, experts said, noting that the heightened tension between the two Koreas could be an opportunity or a crisis.

“If the South Korean government attains fruitful results, such as Pyongyang offering an apology or agreeing on other contentious issues including holding events for separated families or possibly the inter-Korean summit, Park will be able to seek a transition from the past and find a fresh momentum for her state drive,” said Yoon Seong-yi, political professor at Kyung Hee University in Seoul.

“If not, she will start to suffer from attacks from the opposition parties and progressives, blaming her for a failed inter-Korean policy and accusing her of poor leadership ... and this is why she looks so desperate now,” he said.

Park’s performance for the last 2 1/2 years has drawn mixed reactions.

On the domestic front, the president has achieved substantial results on her reform drive including her bill on overhauling the public pension system. But her leadership at times of national crisis has constantly come into question.

Public distrust of her leadership has deepened based on her administration’s responses to the unprecedented outbreak of the Middle East respiratory syndrome in June and the sinking of Sewol last year.

A series of political scandals involving conflicts between groups of aides as well as the government’s inconsistent policies on tax and health insurance has damaged her credibility.

Park has constantly called for public support for her reform drive, but questions have built up over her authoritative, top-down leadership, which remains unchanged despite constant demands from the public.

Presidential documents were leaked to media late last year, raising speculation over the level of discipline within Cheong Wa Dae. Park also came under fire for refusing to abandon aides who were involved in a related influence-peddling scandal.

She has also struggled over her tax policies as the government backtracked on its initial plan to revise the tax settlement scheme in the face of public worries that the middle class would have to pay more.

Her approval ratings plummeted to below 30 percent on Jan. 27, the lowest rating since she entered office. According to local pollster Realmeter on Monday, her job ratings quickly rebounded to 41 percent last week due to an extra holiday designated by her government to mark the 70th anniversary of Korea’s liberation from 1910-45 Japanese rule and also Seoul resuming its loudspeaker propaganda in retaliation of North Korea’s mine attack.

Her job ratings reached its peak at 42.4 percent on Friday as her defense team vowed to take stern action after North Korean leader declared a “quasi-state of war” and put frontline troops in full combat readiness.

Park stood firm Monday and urged North Korea to apologize over its recent mine attack, stressing that without a clear apology, anti-Pyongyang propaganda broadcasts would continue.

The remark was apparently intended as a clear message to her national security team engaged in the unusually lengthy talks with their North Korean counterparts at border village of Panmunjeom, not to walk away with a weak agreement and stick to her principled approach toward Pyongyang‘s provocation, a Cheong Wa Dae official said.

Park has kept her two-track approach, employing both dialogue and a stern response to North Korean provocations.