He knew about Koreans’ reputation of being extremely difficult to work with, but didn’t care too much. He was determined to see for himself the inner workings of the enigmatic Korean company he believed would soon pose a major challenge to more established brands from the U.S., Europe and Japan. This company would be unstoppable once it got on a roll, his instinct was telling him.

Surdej was half right and half wrong, he writes in his memoir “Koreans are Crazy!“ published here last month. 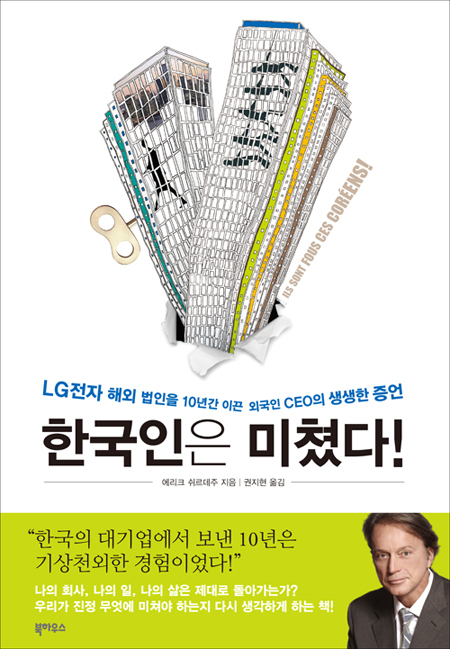 In the years that followed, the Korean company he joined came marching in European markets, giving him the chills and thrills of high growth that he wanted.

Yet, the extreme ways the Koreans worked, or the Korean company worked were well beyond his expectations. It was more than a cultural difference he had thought he could overcome with ambition, passion and professionalism.

“The 10 years at LG was the most bizarre experience of my life, much more than just a professional challenge in (my) career,” Surdej recalls.

His book, at 178 pages, is the story of his triumphs and failures at LG -- although failures outweigh triumphs, according to the author -- over the 2003-12 period, from the cultural shock on day one to the unforgettable day he got fired.

Long, grueling hours, rigid, militaristic hierarchy, after-work parties that felt like cult gatherings, overly controlling bosses and the unyielding obsession with numeric growth -- none of these were easy for Surdej to adjust to, but he somehow managed to immerse himself in the environment so that he earned the nickname, “LG addict.”

“I couldn’t understand how a company on solid footing to grow can cause such a high level of stress on its employees. ... The company looks strong, products are attractive and innovative. Growth seems assured. Then why are they so insecure?” Surdej writes, recalling his first day at LG.

Slowly, he begins to understand that every element of the Korean office exists for one reason -- to perform. In a top-down, command hierarchy like an army unit, LG moves in perfect unison, principle and efficiency. Everyone competes on one’s own respective field and level to excel competitors or self.

First published in France earlier this year, the book has drawn keen interest in the French media. For a country where five-week vacations and a 35-hour workweek are the norm and corporate success stories like that of LG are a thing of the past, a rare insider’s look at the Asian growth story may have provided an opportunity to look at their reality from a different approach.

Yet, to Koreans, at least to those who don’t feel personally offended by a foreigner blowing the whistle on how Korea’s proudly global brands have been created by far-from-global workplace practices, Surdej’s book may raise very different questions.

Can Korea Inc. continue to grow, even as their time-honored formula for growth is fundamentally threatened by the increasing public notion of work-life balance and individualism? What if the future is for companies with creative ideas, not with technological prowess that can be earned by a legion of hard-working, tenacious and devoted employees?