Korean politics through the eyes of British journalist 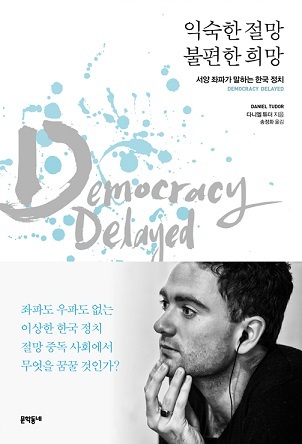 For Daniel Tudor, a former Korea correspondent for the Economist, Korean politics seems a bit strange.

With blurred ideological differences between the right-wing and left-wing parties, the left is mired in the past and lacks professionalism while the right has no concrete agenda other than a pro-conglomerate, me-first policy.

“Is Korean democracy in retreat?” Tudor, 33, asks in his latest book “Democracy Delayed,” which was recently published here in Korean.

In the title alone, Tudor gives a current political snapshot of the country, where he believes the public is experiencing extreme political fatigue and despair from ongoing distrust of politicians, lack of defining and constructive policies for each party, negative political framing and the absence of an effective opposition party.

He touches upon an array of thorny incidents that have stirred hot political debate here, such as last year’s Sewol ferry disaster, the 2008 U.S. beef protest and ongoing North Korea issues.

Tudor, as a journalist himself -- who now runs crowdfunded media platform Byline -- is critical of Korea’s media environment. Covering both Koreas for the British weekly from 2010-2013, the author shares his experiences and insights reporting in the country, where he met political heavyweights and major company officials. He raises concerns for Korea’s highly censored, conglomerate-controlled media environment and hopes for a more reasonable, liberal press to flourish here, which will effectively reach their audiences with intellectual and sharp perspectives.

At 230 pages, his harsh yet thoughtful criticism includes pieces of advice for a better democracy. “Citizens have to voice out,” Tudor says in the book. He suggests using social networks to develop effective political debate where people can freely express themselves and creating a grassroots movement here similar to Italy’s populist Five Star Movement.

Unlike his first book “Korea: The Impossible Country,” which was written for non-Koreans, the new book is written for Koreans by a non-Korean who feels deeply connected to the country he lived in for 10 years. Combining an insider’s acumen and outsider’s insight, Tudor offers some much-needed critique of the current political system.