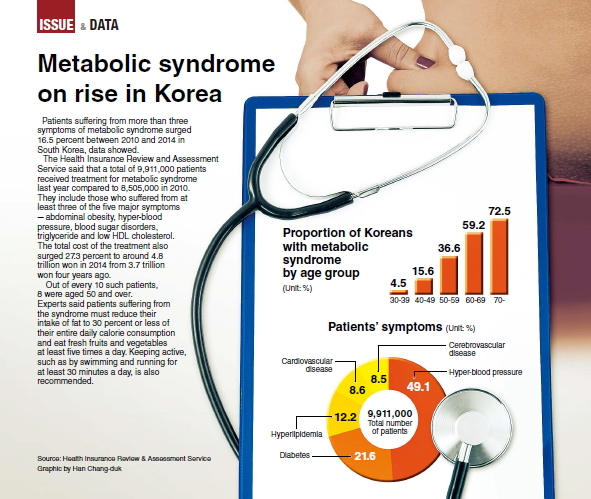 Patients suffering from more than three symptoms of metabolic syndrome surged by 16.5 percent between 2010 and 2014 in South Korea, data showed.

Health Insurance Review and Assessment Service said that a total of 9,911,000 patients received treatment for metabolic syndrome last year compared to 8,505,000 in 2010. They include those who suffered from at least three of the five major symptoms ― abdominal obesity, hyper-blood pressure, blood sugar disorders, triglyceride and low HDL cholesterol. The total cost of the treatment also surged 27.3 percent to around 4.8 trillion won in 2014 from 3.7 trillion won four years ago.

Out of every 10 such patients, eight were aged 50 and over. Experts said patients suffering from the syndrome must downsize their intake of fat to 30 percent or less of their entire daily calorie consumption and eat fresh fruits and vegetables at least five times a day. Keeping active, such as by swimming and running for at least 30 minutes a day, is also recommended