In recent years, the U.S. has deployed a series of rotational units to Korea, including an 800-strong cavalry battalion and a fleet of 12 F-16 fighters, claiming they were better-trained, more agile forces that would enhance military preparedness and operational maneuverability.

But some observers say that the rotational troops of the 28,500-strong U.S. Forces Korea might be more easily deployed to undertake a broader range of tasks across the region rather than focusing wholly on peninsular security, and that their understanding of Korea-specific issues could be superficial.

“U.S. rebalancing strategy stipulates the need for realignment of the U.S. forces deployed on the Korean Peninsula, which would be gradually reconfigured toward supporting regional or even global missions rather than addressing traditional static peninsular defense,” said Michael Raska, research fellow at the Institute of Defense and Strategic Studies, affiliated with Nanyang Technological University in Singapore.


After the prolonged warfare in Afghanistan and Iraq, the U.S. has pushed to realign its troops across the globe in line with its efforts to reduce ground troops and increase the strategic flexibility of its forces. The rotational deployment is one of the methods to back its troop realignment amid cuts in defense spending.

This summer, the U.S. will dispatch a new brigade combat team comprising some 4,600 soldiers from 2nd Brigade Combat Team, 1st Cavalry Division, to Camp Casey in Dongducheon, north of Seoul, on a nine-month rotational basis.

The new unit is to replace the deactivating unit, 1st Armored Brigade Combat Team, which has served here for some 50 years. The deactivation, slated for June, comes as the U.S. Army seeks to reduce the number of combat brigade teams to 32 from 45.

The U.S. also plans to deploy the Multiple Launch Rocket System battalion to join the 210th Field Artillery Brigade in Camp Casey in June on a nine-month rotational basis. The battalion consists of some 400 troops from the 2nd Battalion, 20th Field Artillery.

Last year, the U.S. also rotationally deployed a dozen F-16 fighter jets with 300 troops to Osan or Gunsan air bases, and an 800-strong cavalry unit to Camp Hovey in Dongducheon and Camp Stanley in Uijeongbu, north of Seoul. 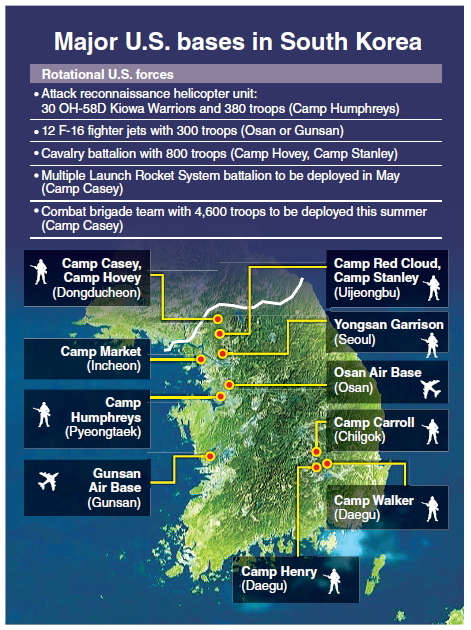 In 2013, the U.S. deployed an attack reconnaissance helicopter unit including 30 OH-58D Kiowa Warriors and 380 troops on a rotational basis.

U.S. Defense Secretary Ashton Carter cast the rotational deployment of his troops here as an effective system in terms of maintaining readiness.

“You can’t afford to have a situation where people are coming in and they don’t know the situation and they’re coming in dribs and drabs and being trained up as they go, and that has historically been the case for the Army on the Korean Peninsula ― unaccompanied tours, short, people would come in and get trained up,” he said during a meeting with U.S. Forces in Korea last week.

“So, I think from a point of view of readiness, which is at a high premium here on the peninsula, it is better.”

Some critics said that the rotational forces could be less skillful in handling Korea-specific issues as they would be deployed here for only six to nine months and move out to other operational areas. They also pointed out that the expeditionary troops would have less time to forge a rapport with South Korean forces, a critical element of the alliance.

“As they come here for a shorter period of time and then move between different operational theaters, they may have less time to get used to Korean security issues,” said a security expert, who requested anonymity.

“There may also be some issues regarding their skillfulness and experience, even though they may be nimbler and better in responding to various types of security challenges in the region and beyond. There could also be a transitional period ― when troops are rotated in groups ― which could affect combat readiness.”

But some U.S. military experts say that in terms of readiness and troop cohesion, the rotational deployment is better for peninsular defense.

Most ordinary U.S. troops have so far come here for up to one year without any significant training on Korean culture and their specific roles on the peninsula ― the reason why they have had to spend the first several months getting familiarized with the host nation.

The troops have also come from all over the Army rather than uniformly coming here or leaving as a group, with some of them leaving sooner than one year. This has resulted in constant personnel changes, which has apparently affected troop cohesion, analysts said.

“I have been told that most units in the 2nd Infantry Division have had about 7-9 percent turnover of personnel each month. With that level of turnover, they need to train once they arrive in Korea. (Thus) it is very difficult to keep any unit really cohesive, trained and ready to operate,” said Bruce Bennett, senior defense analyst at the think tank RAND Corporation.

“So, the U.S. Army decided to change to the kind of rotational basis that it used so well in Iraq and Afghanistan.”

But in the rotational system, a unit is to master all individual and unit skills required for their missions in Korea before arriving. And troops come here as a group and stay together for nine months, reducing the personnel turnover, he explained.

“Yes, occasionally a soldier does have to go home early, but not very often ― there is supposed to be very little turnover of unit personnel when they are in Korea. This approach makes for a far better trained unit that is more cohesive,” he said.

“The bottom line is that rotational units like the U.S. armored brigade combat team are much better trained and far more cohesive ― they should be a much more capable unit, and thus more likely to deter North Korea.”

Concerns about the possible downsides of the rotational deployment mostly revolve around the increasing “strategic flexibility” of U.S. troops ― an abiding source of friction in the South Korea-U.S. alliance.

“The USFK’s flexible deployment would essentially limit their vulnerability to a potential surprise attack by North Korea ― by lessening the ‘tripwire’ effect of having U.S. forces close to the Demilitarized Zone, but more importantly, also provide greater latitude for new supporting roles, missions and capabilities that would cover wider multifunctional, expeditionary context, including regional contingencies beyond the Korean Peninsula,” said Raska.

“However, some Koreans have interpreted the proposed changes as a removal of the traditional frontline ‘trip-wire’ deterrent and commitment to defend South Korea.”

South Korea has long wanted U.S. troops here to focus entirely on deterring its communist neighbor, which has constantly posed security threats with its pursuit of nuclear arms and longer-range ballistic missiles.

But the U.S. has sought to increase the strategic flexibility of its troops here rather than maintaining them as static forces whose missions are only limited to peninsular defense.

The need for strategic flexibility has further increased as Washington has faced potential adversaries like terrorists who could launch attacks anytime in any place and by any method ― without any geographically fixed strongholds. The U.S.’ financial challenges, coupled with its troop drawdown, have also driven Washington to pursue the efficient system of the rotational deployment.

The issue of strategic flexibility was one of the hot-button issues in the early 2000s ― a period when the bilateral alliance was going through a structural change amid Washington’ global troop restructuring and Seoul’s push for a greater self-defense role. The thorny issue was settled as the allies agreed on the strategic flexibility of the U.S. forces in 2006.

Noting the need for Seoul to respect the U.S.’ military decisions, security experts say that the rotational deployment of the U.S. forces should proceed in a transparent way that would not aggravate South Korea’s long-running concerns over its possible downsides.

Some also pointed out that what matters most is whether the U.S., despite its troop reduction and cuts in defense spending, is fully capable of providing augmented forces to the peninsula during a contingency regardless of static or expeditionary forces.