The central bank lowered this year’s growth forecast to 3.1 percent from 3.4 percent, showing a large gap from the Finance Ministry’s forecast of 3.8 percent.

“We believe that falling oil prices definitely boosted consumption, but it was crossed out by a handful of comprehensive factors,” BOK Gov. Lee Ju-yeol said in a press briefing. 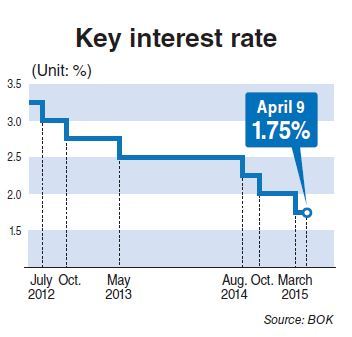 Lee also insisted the continued tax revenue shortage remained one of the major negative factors that led to the downgrade.

“The country had a severe tax revenue shortage twice in a row in 2013 and 2014, and we are expecting yet another shortage this year,” Lee said, stressing that an annual tax shortage undermines the growth rate of both that year and the coming year.

The central bank also slashed its inflation forecast to 0.9 percent from 1.9 percent. It estimated the 2016 projection of consumer prices to increase 2.2 percent, down 0.4 percent from an earlier forecast of 2.6 percent.

Despite lackluster growth, the BOK’s Monetary Policy Committee froze the key base rate at a record-low 1.75 percent for two straight months on expectations of a moderate recovery in domestic consumption and investment.

The BOK governor said now is the time to wait and see the outcome of the past three rate cuts ― the BOK lowered the key base rate three times, in August and October last year and March this year, to help boost the national economy.

“Eight months have passed since we implemented the key rate cut in August, and I insist that the rate cut needs at least six months to one year to yield visible changes,” he said.

“The U.S. economy has continued to recover, and the eurozone also has been gaining momentum, but growth in China and the emerging economies has been stagnant,” Lee said.

The governor alleged that the economies’ different growth momentum, monetary policies and geopolitical risks have created a matrix of data-dependent estimates, in support of the rate freeze.