But things turned difficult for them when Kim’s mother, 80, was diagnosed with dementia three years ago. In spite of the medical treatment paid by the couple, Kim’s mother’s condition quickly worsened ― to a degree where she could not recognize her own children. Kim, who suffers from her own health problems including osteoporosis, is thinking of placing their mother, who currently lives with Kim, in a residential medical facility for the elderly.

“I thought my husband and I were well prepared for our post-retirement years, but I’m not sure anymore,” she said.

“I don’t want my mother to stay at an ill-equipped facility, but the ones that I like cost about 1.3 million to 1.5 million won a month. My husband is diabetic and I have osteoporosis. We don’t have major health issues, but I’m just constantly worried about our finances because I don’t know what will happen next.” 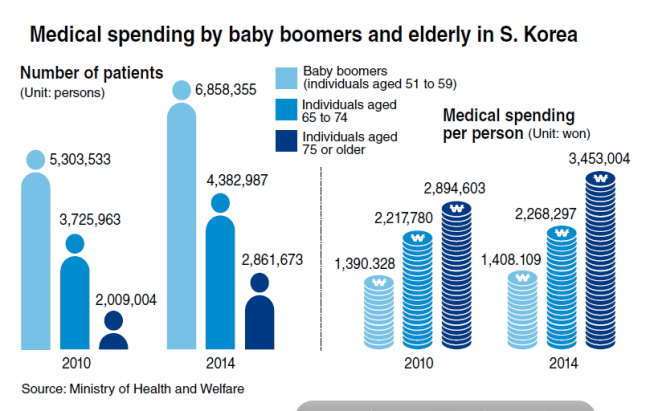 Kim is one of more than 6.8 million baby boomers (those born 1955 to 1963) who are entering their 60s this year. The government predicts that medical costs for the elderly will continue to rise as the boomers’ population begins to grow older, thereby doubling the current elderly demographic ― those aged 65 or older ― to more than 7.2 million.

“It is certainly worrisome because the cost for the boomers increased by 31 percent from 2010 to 2014, which is more than the cost for those currently aged 65 or 74 increased in the same time period, at 20. 3 percent,” said an official from the Health Ministry.

Last year, about one-third of total medical costs ― 19.4 trillion won ― was spent to treat the elderly, who already account for 11.9 percent of the total Korean population. The cost increased by 10.4 percent from the year before, mostly due to the increased number of those aged 75 or older who sought medical help for dementia and cerebrovascular diseases, according to the latest government data.

Shin Hyun-chul, a researcher at the Health Insurance Review and Assessment Service, said while many baby boomers today are supporting their parents ― mostly aged 75 or older ― with their medical costs, it is unclear if they would be able to receive support from their children if they become ill in their later years.

“All we know for sure is that the cost will be huge to treat baby boomers,” he said. “But we don’t know who is going to pay for it.”

Experts say both the physical and mental well-being of the elderly is already at risk.

According to the Korea Institute for Health and Social Affairs, almost 70 percent of all senior citizens either lived by themselves or with their spouses. The average monthly income for a single elderly person was 799,400 won, which is less than half the country’s average household income at 3.53 million won.

Korea’s elderly suicide rate was 81.9 for every 100,000 in the population in 2012, the highest among the OECD. According to data from the National Assembly Budget Office, 73.6 percent of senior citizens from 2006-2012 thought of killing themselves the most when they faced financial difficulties or illnesses.

The poverty rate for elderly households was 49.3 percent in 2013, according to Statistics Korea.

Almost 90 percent of the elderly were also suffering from chronic diseases such as diabetes and high blood pressure, while one-third were either depressed or obese as of last year. Physical inactivity is considered one of the major risk factors for dementia, as indicated by more than 80 percent of the elderly spending their leisure time watching TV.

The Health Ministry expects that the number of those with dementia will exceed those who are aged 65 or older by 2024.

“I think the only actions we can take are preventive ones, as we can’t stop the baby boomers from growing old,” he said.

Studies have shown that an appropriate lifestyle, including a healthy diet, regular exercise and an active social life, can delay or prevent brain disease.

“Local health and welfare centers should take on that role. Senior citizens should learn to socialize with others and exercise regularly. They should also be introduced to more recreational activities, so they can avoid drinking or just spending their time alone at home.”

Even for many millennials, their parents’ post-retirement years are some of their biggest worries.

“I don’t know if I should even get married, because once I start supporting my own kids, I wouldn’t be able to support my parents,” said a 27-year-old who wished to be identified only as Park.

Her parents do not have a lot of retirement savings and the only income they’d have as retirees would be national pension payments. Park currently works as an intern at a large conglomerate and does not support them.

“Once, my mother told me that her generation is the last generation to support their parents and the last to be ‘abandoned’ by their children. I don’t think she understands the situation of today’s labor market. What she said makes me sad and anxious (to get a full-time job) at the same time.”