“We wanted to clearly and concisely explain the real daily challenges ordinary people face, and the surprises which that brings,” James Pearson, a Korea correspondent for Reuters, told the Korea Herald through an email interview.


“There are few (books) which really lay out in very clear terms what life is really like for the average person on the street.”

The result is his new book “North Korea Confidential,” coauthored with Daniel Tudor, a former correspondent for the Economist. Their book paints the most timely, realistic picture of North Korea that has often been overlooked by existing literature in the market.

Tudor believes that the North Korean regime is pretty stable. “The geopolitical situation is balanced,” he added. “But the people’s psychological distance from the state is increasing, meaning that they are more ready to break the rules than before. I am not talking about political rules, but more economic and social rules. This is where the change in North Korea is happening,” he said.

So in their book, the authors compiled their visits to North Korea, journalistic backgrounds, copious research and interviews of experts to give a snapshot of the world’s most reclusive country through the average citizen living there.

They are, the authors said, concerned with living costs, raising children, looking fashionable and having fun from time to time.

The book, at 192 pages, is a full exposure of the communist state, a home to some 24 million people, as best as it could from outside the country, through the lens of the black market and everyday people-to-people encounters.

When describing the economy of North Korea, collective farms, communism and state ownership are outdated terms, the authors write. 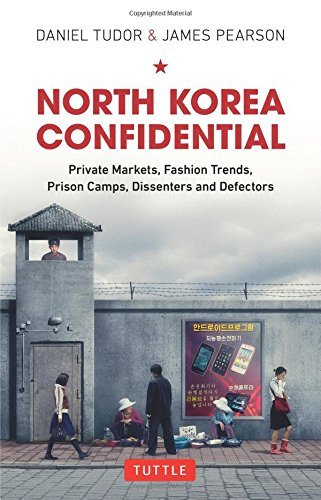 Instead, the new capitalism relies on people leading a double life between official state jobs that pay a meager salary and a black market where people make a living through “jangmadang,” which literally translates to marketplace. On the stalls of jangmadang, people buy and sell everything from rice to Hershey’s chocolate to a basketball and Cuckoo rice cookers from South Korea.

When did this private-public economic coexistence all begin?

According to the book, the great famine in 1990s sowed the seeds of marketization.

The solution was the economic double life, which includes women running market stalls, selling foods and engaging in import-export activities, which provides the living for most North Koreans today.

“North Koreans are incredibly capitalist,” Pearson said. But he believes that when it comes to reform or the possibility of adapting Chinese-style capitalism, it will take time.

“It is not quite China,” he added. “But there have certainly been examples of the state struggling to accommodate these changes by introducing more economically liberal legislation.”

“This doesn’t, however, mean North Korea will open up any time soon,” Pearson added, citing China’s politically repressive situation despite its economic success.

Tudor believes that the North Korean government is being forced to accept slow, gradual changes. He depicts the country as “walking a tightrope” between the need to change and the fear of changing too fast.

The economic snippet is just one of the many startling topics introduced in the book.

North Korean people spend their free time drinking and dancing just like their Southern cousins and the rest of the world. Korean dramas and Hollywood movies are readily available, thanks to USB sticks and bribing money in case people get caught watching. Many people hang out, date and fall in love.

This is not to say they are leading an easy, rosy life ahead. It is all in spite of their tough situations.

“North Koreans are people too with their own vices and desires,” Pearson commented.

“The ‘state’ and ‘the people’ are totally different things,” added Tudor. “It is possible to hate one and love another.”

The book also spends some time in the past, especially in its recounting of Kim Il-sung’s rise and Kim Jong-il’s succession to power in order to explain who is really in charge of the country today. The book introduces hidden power systems such as The Organization and Guidance Department and the Personal Secretariat to discuss the intertwined power struggles inside the country, information which is crucial to understand the current state of affairs.

In analyzing an array of topics, the authors gathered rich inside information and scoops from sources, including Pyongyang officials, defectors, diplomats, NGO workers and traders. They cannot divulge their sources due to the risky nature of the country.

If you are a North Korea watcher or simply curious about the country, it’s definitely worth a read. Because what is really happening inside the country rarely makes the headlines.