Pagodas in the mist

By Korea Herald
Published : Mar 24, 2015 - 18:32       Updated : Mar 24, 2015 - 18:32
Long billed as the “Land of Pagodas”, Myanmar does nothing if not live up to its name. It’s 5:30 p.m. in Bagan and I’m standing at the top of stupa 305 with a small group of others travelers waiting for the sunset over the Bagan plain. Local cattlemen herd their skinny beasts across the dry plain, leaving clouds of dust in the air. Just beyond those dusty clouds, more than 100 large and small pagodas seem to hover in the hot evening air.

The view of the pagodas is stunning, and it’s easy to understand why so many visitors linger here until the last light.

“There are more than 2,000 stupas and temples in Bagan,” says our guide, a young Burmese girl who goes by ― and is comfortable with ― the name of “KK.”

“We believe that building a pagoda is the highest form of merit-making. It helps secure a better life when we are born again.”

And anyone can build a pagoda, she adds. 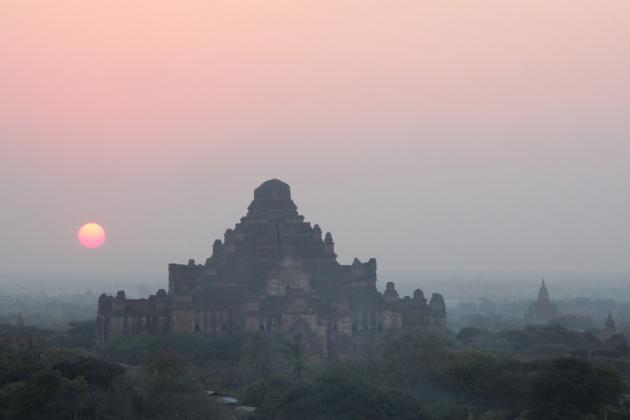 From a pagoda of a common man to the king’s stupa with its gilded pinnacle, more than 10,000 were constructed between the 11th and 13th centuries. Fast forward to the 21st century and more than 2,000 pagodas are still standing. I have no idea how the lives of their patrons and builders have become over 1,000 years of reincarnation, but from the top of stupa 305 ― where we are still standing ― I can say with certainty that the ruins of Bagan will draw millions of tourist dollars to Myanmar.

Tucked away in the country’s uplands and nestled along the bend of the Ayeyarwady River, Bagan was the capital of the Kingdom of Pagan ― the first kingdom to unify on the Ayeyarwady Plain. The city enjoyed its glory for two-and-a-half centuries before falling to Kublai Khan’s raiders. The Bagan historical site, it’s said, is in many ways equivalent to Cambodia’s Angkor Wat. British historian Arnold Toynbee, who saw both, even coined his own phrase ― “See Bagan and live. See Angkor Wat and die.”

You need a week or more to see the 2,000 pagodas from different angles. You can take a hot air balloon for an airborne tour of the plain or negotiate a dusty path in a horse-drawn carriage to enjoy scenes that date back thousands of centuries. A bicycle, though, is the best mode for exploring the Buddhist monuments.

Unfortunately, we have only two days in Bagan so we pick three of the most important pagodas.

Ananda Pagoda is first on our list. Laid out in cruciform, it houses four huge standing Buddhas, each facing east, north, west and south. Ananda Pagoda is greatly revered by Myanmar’s Buddhists, who insist that Bagan is not complete without a visit. Not ones to argue, we make it our first stop.

But in the end we prefer Sulamani Guphaya, our second stop. Much subtler and a lot less grand, this red brick pagoda was built in the 1180s by King Narapati Sithu. Its name means “Crowning Jewel” or “Small Ruby” and it’s home to a gallery of frescos recounting tales of the Lord Buddha. Beautiful and original, the 12th century art, along with walls and hallways, is a true delight.

In terms of drama, my favorite pagoda is Dhammayangyi Temple.

“The bad man’s pagoda,” says KK, as we look at the massive pagoda standing in the distance.

Bad because King Narathu came to the throne by assassinating his father Alaungsithu and his elder brother. He built Dhammayangyi Pagoda to atone for his sins. How big were his sins? You can see Dhammayangyi from just about anywhere, as it’s the largest pagoda on the Bagan Plain.

The drama continued even as it was being built with King Narathu being assassinated during construction, leaving it incomplete.

Dhammayangyi draws visitors both for its size and its story, and you can almost feel the chill of murder as you walk along the dim stone path crisscrossing the stupa or climb to the top to take in the view across the plain.

No trip to Bagan is complete without watching the sunrise, and so it is that the next morning I am again perched at the top of a pagoda waiting for the first day’s rays.

When it comes it is breathtaking, with the walls of the pagodas emerging quietly from the dark. Sadly though, the magic lasts only a few brief moments as a hot air balloon heads up into the sky, blocking the view and polluting the clear morning sky.