[Weekender] Awake for too long

The bird’s remarkable ability has been the subject of research at the Pentagon for the past six years, to find a way to keep their pilots and soldiers awake for as long as possible.

In his book “24/7: Late Capitalism and the Ends of Sleep” published last year, Columbia University professor Jonathan Crary argues that any discoveries about the bird’s special traits will affect not only the military but also the world of work and consumer culture. 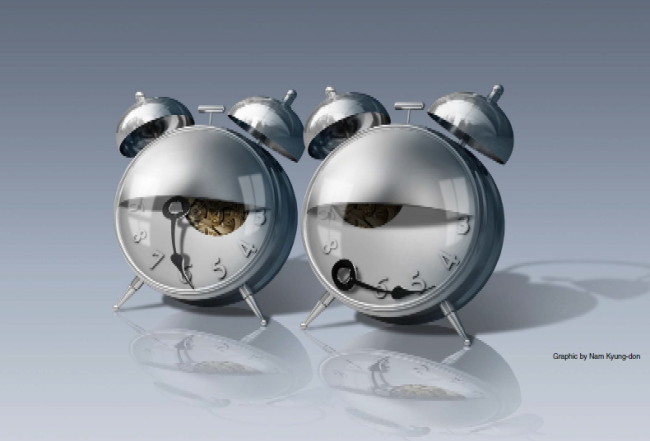 While South Korea may not know the bird’s secrets, the country is already experiencing what Crary warns in his book -- a sleepless world that “becomes a non-stop work-site or an always-open-shopping-mall of infinite choices, tasks and selections.”

One of the most sleep-deprived countries in the world, South Korea is already putting its people’s health at risk by keeping them awake too long.

A single South Korean person on average slept 6 hours and 53 minutes a night as of 2013, the lowest among the OECD.

On top of its notoriously long working hours -- among the longest in the OECD -- South Korea is also known for its 24/7 services and businesses, including convenience stores, saunas and “quick service,” a fast delivery service by motorcyclists available any time, day or night.

About 15 percent of all Koreans who are employed full time are shift workers, many of them working in health care, transportation, entertainment and security. According to the Korean NeuroPsychiatric Association, almost 25 percent of Korean shift workers suffered from sleep disorders in 2013.

Experts say that such sleep disturbances, as well as the country’s light pollution and excessive use of smart gadgets are a threat to the health of its people.

Artificial light, including the glow from electronic devices and illumination of the night sky, are thought to be the biggest causes of sleep deprivation.

“Those who work at 24/7 convenience stores may have sleeping disorders because they have to be up for night shifts. At the same time, because that convenience store keeps its lights on 24/7, someone else in the city may not be able to sleep.”

According to the Health Ministry, the number of Koreans who sought medical help for sleeping disorders, including insomnia, increased from 260,000 in 2009 to 380,000 in 2013.

Lee said working night shifts, as well as sleep deprivation due to heavy workload, may lead to insomnia as well as other diseases.

“Melatonin, an antioxidant that makes us sleepy, is generally produced at night. But late shifts as well as irregular exposure to light can disrupt its production,” she said. “Melatonin is also integral to the health of one’s immune system.”

An overseas study of 120,000 nurses found that those who worked night shifts were the most likely to develop breast cancer. In 2007, the WHO’s International Agency for Research into Cancer concluded that shiftwork that involves circadian disruption probably increases the risk of cancer.

Crary predicts that once non-sleep products are aggressively promoted by pharmaceutical companies after they are used to create sleepless soldiers, the drugs would eventually become a necessity, rather than an option, for many.

Kim Joo-young, a 26-year-old call center agent in Seoul, said she would purchase such products immediately if they were available today.

She works from 7 p.m. to 6 a.m. five days a week, and has suffered indigestion, mild depression and hand tremors because of the poor quality of sleep she gets from working shifts.

“What depresses me the most is that I can’t do anything during the day -- that I have to sleep when everyone else is out there doing their own things,” she said.

“At least once that drug becomes available, I would be able to do things during the day. My life would be more than just work and sleep. I don’t mind not sleeping if it means I get more time for myself.”

Yet, in Shakespeare’s words, Kim and many others would lose a lot should the drugs ever become available – “sore labor’s bath, the balm of hurt minds, great nature’s second course, and chief nourisher in life’s feast.”