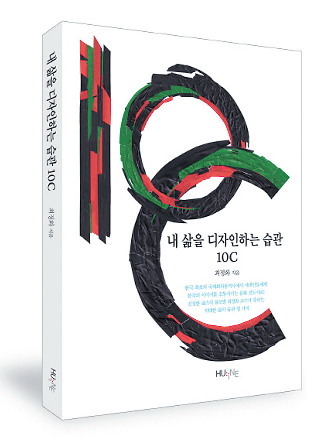 The Ten Habits of Designing My Life, 10C
By Choi Jung-wha
(HUINE)


People often ask me how to be successful, says Choi Jung-wha, the president of Corea Image Communication Institute. But she admits that she doesn’t really like the term “success.”

“Success is a result, not the end-goal itself,” says Choi in her new book, “The Ten Habits of Designing My Life, 10C.” She believes that many so-called successful people live by principles and habits in their lives.

As the title suggests, the book is Choi’s dose of wisdom, gleaned over three decades as an interpreter-professor and also the head of the nonprofit organization that promotes Korea internationally.

At 288 pages, she introduces a list of 10 habits that contributed to her fruitful career. The list of words starting with the letter C is concentration, culture, communication and conviviality, cooperation, care, creativity, confidence, challenge, curiosity and commitment.

Choi, as a strong advocate of cultural diplomacy, describes culture as one common language that doesn’t require an interpreter in order to communicate.

Reflecting her experiences of living in France as a master and doctorate student at the University of Paris III, she credits Korean food like bulgogi and japchae and the Korean card game hwatoo as her go-to item to make new friends and promote Korea in the 1970s and 80s when the country was less known in the Western world.

She also talks about K-pop singer Psy as a great example of enriching the image of Korea through his cultural talent. Psy’s sensational song “Gangnam Style” was a worldwide phenomenon even though the song’s lyrics were mostly Korean, she writes.

The book also describes Choi’s ritual that complements her habits, such as exercising at least 15 minutes a day, experiencing diverse cultures with full five senses and putting into action the thoughts crossing one’s mind.

As a veteran French-Korean interpreter of many years, the 59-year-old author has written around 30 books so far. She has also served as an interpreter for five Korean presidents at major international summits.

It’s all there. Her vast experience ― both ups and downs ― and life lessons, along with her encounters with the late Cardinal Stephen Kim Sou-hwan, U.N. Secretary-General Ban Ki-moon and many heads of large conglomerates, are included in the book.