The 36-seat restaurant opened in December near Seoul’s Garosu-gil, a half-underground affair outfitted with colorful wooden buoys and a cute model lighthouse.

For Lobster Shack co-owner and baker Aiden Kim, specializing in the famed roll, which first appeared in New England in the 1920s, was something of a no-brainer.

“I went to high school in Maine,” Kim said, explaining his hands-on familiarity with the dish and sharing his memories of chowing down on the rolls as a teenager.

Kim, who studied bread at Le Cordon Bleu-Sookmyung Academy, teamed up with Park Su-seok, currently Lobster Shack’s executive chef, to craft their own take on traditional Maine- and Connecticut-style rolls along with a few other variations of the dish like their special orange salsa roll.

Orange is used to good effect in the form of a housemade orange peel and juice-spiked salsa that is draped over plump, succulent lobster meat and then topped with crisp, fried tortilla chips dusted with a fiery Cajun seasoning.

Kim is also a fan of other piquant takes on the roll like the Sriracha mayo and the spicy curry mayo variations, while Park likes the special jala-cheese mayo roll, which is stuffed with warm lobster meat and topped with a jalapeno cheese sauce.

Purists can take comfort in more classic versions like the Connecticut roll, which arrives stuffed to the gills with supple and warm lobster meat that has been seasoned with tarragon, lemon juice, lemon zest and a restrained amount of butter, for a light and fresh dish.

It is here that the bun, which baker Kim crafts himself, really shines through.

Seared on the griddle in butter, the bread, which is not like a standard hot dog bun, but rectangular rather than oblong, is soft through and through, fluffy yet sturdy with a hint of elasticity, making it the perfect foil to all that moist, snowy, buttery meat.

“We are working on a squid ink bun to pair with variations like the spicy curry mayo roll,” Kim, 32, revealed.

Each roll comes with a heap of fries on the side, and those who want to can add more lobster meat to their roll for an extra 10,000 won.

While lobster rolls are clearly the main attraction, it would be a shame not to check out other eats on the menu like the shrimp basket.

Chef Park, 31, revealed that thrice-dunked beer-battered shrimp is marinated in extra virgin olive oil, Italian parsley and other seasonings before being battered and fried.

The meaty, medium-sized shrimp emerge golden and seasoned so well that each crisp, hefty morsel is good on its own, sans condiments.

New eats are also in the works at what already has become a bustling and popular hangout. 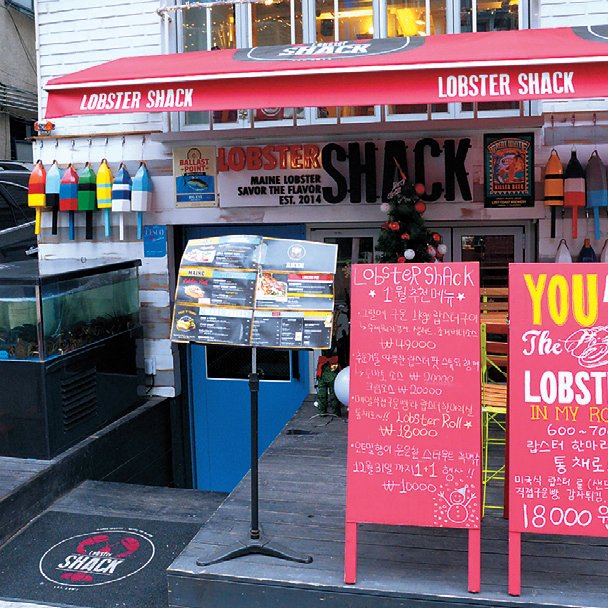