For love ― and luxury

Liu Xin, 32, a Beijing local, has been buying products for her child from overseas websites since 2011. She has bought everything from milk powder, a stroller and a car baby seat to feeding bottles and body lotions, all of which have been delivered to her doorstep through international shipping.

“Every mom around me knows how to shop from overseas websites for their babies. It is now a must-have life skill,” she said. 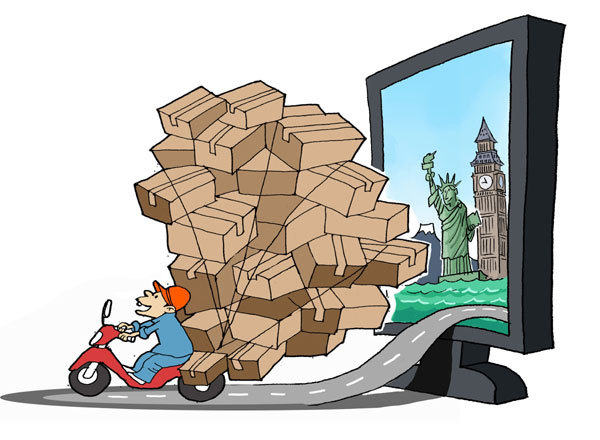 Liu is one of millions of Chinese who buy products from overseas online platforms and have them delivered to their Chinese addresses. The practice of buying overseas products is so popular it has earned the label haitao, which literally means “ocean search” in Chinese.

In 2013, China had around 18 million haitao consumers who made transactions worth some 80 billion yuan ($13.08 billion) from foreign websites in 2013, up from 10 billion yuan in 2010, according to figures from Analysys International, a Beijing-based Internet consultancy.

And the value of haitao transactions was expected to exceed 120 billion yuan last year.

The traditional method would be for Chinese consumers to place their orders on foreign websites, pay in the store’s local currency and have the products shipped to a temporary address within the country where the store is based. So usually before shopping, Chinese consumers would register with an express delivery company to be allocated with a foreign address. Then the express company would take responsibility for clearing the goods through the Chinese customs and hand them over to a Chinese delivery company.

However, major high-end retailers including Macy’s, Saks Fifth Avenue, Neiman Marcus, and Bloomingdale’s in the United States have teamed up with China’s largest online payment solution provider ― Alipay, the e-payment arm of the Alibaba Group, and Chinese shoppers can now buy goods directly in yuan through the Alipay payment platform and take advantage of its direct shipment service.

“My coat arrived in about 10 days. The international shipment was only 33 yuan through the Alipay platform,” she said.

“As I proceeded to the checkout on Macy’s online store, the webpage automatically linked me to Alipay. Then I logged on to my Alipay account, filled in my Chinese address, and confirmed the payment. The payment automatically added the shipping cost and the estimated tariff. It’s that easy.”

Retailers keen to attract Chinese shoppers are looking at ways to overcome this barrier. Since Black Friday, the traditional sales day after Thanksgiving in the United States, for instance, Amazon China unveiled “overseas sales” on Amazon.cn, where Chinese shoppers can grab deals through a Chinese-language interface, but their orders are procured directly from Amazon U.S. suppliers without any middlemen.

Lin said that major Western shopping sprees such as Black Friday and the Christmas sales have just started gaining the attention of Chinese mass online shoppers.

“There is great potential for these Western sales with Chinese online shoppers,” Lin said.

“My motive for shopping from overseas websites at the very beginning was because of safety concerns. I don’t trust domestic brands of milk powder and everything related to baby products,” said the 32-year-old mother Liu Xin.

Apart from baby products, popular products with haitao shoppers are luxury items such as premium clothing, handbags, cosmetics and skincare.

“The easy access for the Chinese to go abroad, the popularization of the Internet, and the increasing number of purchasing channels are making Chinese buyers smarter,” said Zhou, who expects them to continue to favor Hong Kong, Macau, Europe and the U.S. when it comes to buying luxury goods.

Tariffs account for only a single-digit percentage of luxury goods costs, so it would be possible for the luxury brands to launch regular price discount seasons in China to realize the same pricing mechanism worldwide, notes Zhou.

Chinese consumers bought 47 percent of luxury products worldwide in 2013, contributing approximately $102 billion in sales, according to a report from China Fortune Character. But only $28 billion was consumed in China, and the rest of the consumption took place abroad, according to the report.

“For example, a bag might be priced 45 percent lower in the U.S. and 70 percent lower in France than in China,” Ouyang said. The price gap will continue to widen during major holidays overseas, particularly Christmas, when major foreign brands offer discounts.

While armchair shopping enables Chinese buyers to enjoy a wider range of choices, Ouyang says they should be cautious about purchasing through unofficial sites or through surrogate buyers.

“Knockoffs are flooding the online market, and it’s difficult for customers to tell the genuine goods from fakes,” Ouyang said. “Even if they can, there’s little chance that they will get their money back.”

To help consumers identify fake goods, luxury brands, such as Louis Vuitton and Hermes, are working to form a brand inspection center to offer technical support to the Chinese industry and commerce administration to help law enforcement and the solving of disputes.

By Dong Fangyu and Yang Feiyue