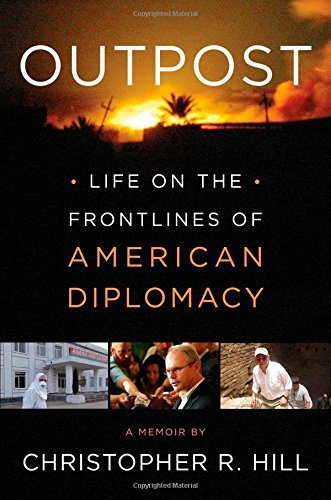 
Chris Hill, in my opinion, was one of the two smartest American diplomats of his generation. The other, Bob Frasure, was killed in 1995 when the French armored car in which he was riding rolled down a mountainside in Bosnia-Herzegovina.

Hill was U.S. ambassador to Iraq, Macedonia, Poland and South Korea, assistant secretary of state for East Asian Affairs and the U.S. envoy to the Six-Power Talks on North Korea. He is now retired from the Department of State and serving as dean of the Josef Korbel School of International Studies at the University of Denver.

He has written a fascinating and compelling book that anyone with any interest in U.S. diplomacy and some of the key issues that Hill dealt with should read. Those issues included the settlement of the Bosnia-Herzegovina and Kosovo wars and the miserable business of trying to arm-wrestle the North Koreans into giving up their nuclear capacity.

He is candid about people. He admired, but with a sharp eye, the late Richard Holbrooke, with whom Hill worked in achieving the Dayton Accord, which ended the Bosnia-Herzegovina war in 1995.

He saw former Secretary of State Larry Eagleburger as a mentor and a model. He shared my enormously high opinion of Frasure. He is critical of the war-mongering former Deputy Secretary of Defense Paul Wolfowitz and tells a wonderful story of Vice President Dick Cheney‘s falling asleep after consuming a large breakfast in a meeting with then-President George W. Bush.

The book has a few mistakes that the fact-checkers should have caught. He confuses Slavonia, in Croatia, for Slovenia, and cites post-U.S.-invasion Iraq as the Middle East’s only Shiite-led state, forgetting Iran, unless one doesn’t count it as in the Middle East. He mistakes British Lord Mountbatten for British Field Marshal Bernard Montgomery. These little errors do not detract from the overall wisdom of the book, in my view.

Hill puts forward some very valuable dicta on diplomacy as it is practiced, which are not only beautifully phrased but also correspond perfectly to my experience as a 35-year American diplomat.

In dealing with foreign officials and other contacts, he notes, “It is always about relationships, not transactions.” Another gem is, “Bombing without diplomacy is just systematized violence.” (What is Kobani, then, now, by the way?) On dealing with the Chinese, he says, “We cannot change them any more than they can change us.”

On the role of the United States in the world, Hill says, “The world still looks to the United States to lead by example.” (I might argue that we are currently doing our best to shed that mantle of responsibility.)

Perhaps the real genius of Hill’s book is the ability he demonstrates to intersperse events, sketches of personalities and commentary in a skillfully woven tapestry that carries the reader along. This one is a must-read for practitioners and observers of diplomacy. (TNS)