The 1,753-ton ship, the Oryong 501, became stranded in waters near Russia at around 2:20 p.m. (Korean time), according to the Ministry of Oceans and Fisheries.

One of the ship's Korean crew members has been confirmed dead, while one Russian inspector and six other foreign nationals have been rescued, it added. Search and rescue efforts are still under way.

The trawler was carrying 60 crew members, including the Russian inspector and 11 South Koreans. Thirteen others are from the Philippines, with the remaining 35 from Indonesia, according to the ministry.

The ministry said it had been reported that the vessel listed as seawater flooded in due to bad weather. The crew members had requested help from a nearby ship as well as Russian rescue authorities.

Seoul's foreign ministry said it has asked the Russian government to work quickly to search for and rescue the crew members.

The Oryong 501, built in Spain in 1978, was acquired by South Korean fisheries firm Sajo Industries in 2010. The company has set up a special headquarters to cope with the accident at its Busan office.

In a briefing held at the Busan office, Sajo Industries said the vessel first started to list at 12:30 p.m. as water flooded in and blocked a drain. The crew members tried to right the ship by using a pump but it listed further, prompting the crew to leave the ship at around 4 p.m.

"The ship sank at around 5 p.m. and eight crew members who were rescued escaped on a life raft, while other crew members are assumed to have escaped wearing life jackets," the company said, noting that one additional crew member had been rescued compared with the figures reported by the government.

The Russian inspector, five Indonesians, one Filipino and one Korean crew member were rescued, it added.

The company said that Korean and Russian ships in the area have joined the rescue operation, adding that it is doing its best to rescue the missing crew members.

Families of the missing crew members, meanwhile, raised complaints against the company that the sunken ship should not have been operating under bad weather conditions.  (Yonhap) 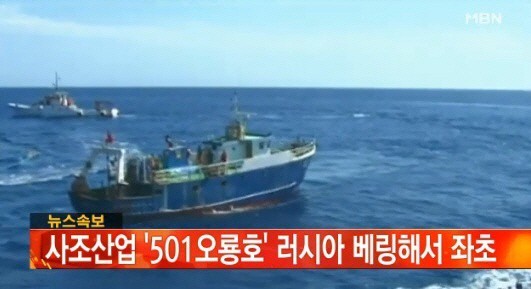