The two sides were unable to narrow their differences over profit-sharing and content management.

Smart Media Rep, a broadcasters’ alliance launched by TV networks MBC and SBS, demanded that Google share more value generated from the group’s content on YouTube, given that they were pouring more resources into creating videos amid rising production costs. The alliance includes CJ E&M, the operator of the popular tvN cable channel, and four general cable programming operators such as JTBC and Channel A.

The alliance has decided to partner with Naver, which runs online video platform Naver TV Cast, as Korea’s largest portal site agreed to let broadcasters take most of the advertising revenue.

“It can be said that negotiations with Google have collapsed,” said a source familiar with the matter.

“It is highly unlikely that the alliance will reestablish its relations with Google, as that could upset Naver.”

The group is currently negotiating with Daum Kakao over the terms of value and content sharing, a Daum Kakao spokesperson said. Daum Kakao operates the Daum TV Pot video-sharing platform.

With the latest partnership with Naver, Korean TV stations such as SBS have begun announcing that they will no longer provide content to YouTube users in Korea.

This also means that users will be prohibited from uploading content produced and distributed by the alliance, which produces more than 80 percent of the country’s shows and dramas.

Beginning in December, users in Korea will be allowed to access and watch the alliance’s content on Naver TV Cast, and on other domestic online video platforms such as PandoraTV and GomTV.

This could affect users, who are used to watching free content on YouTube, which saw its market share jump from 2 percent in 2008 to 80 percent this year in Korea in part due to the increasing popularity of broadcasters’ content, analysts and industry sources said.

Also, independent producers could feel diffident about posting their work on the Google platform, since they would want to maintain a good relationship with broadcasters.

“This conflict was more about who will take control of traffic in the face of rising mobile and Internet usage,” said an industry source.

“So in a sense, it was really a battle between Naver and Google, and Naver offered a better deal to broadcasters.”

And that deal was allowing SMR to take about 90 percent of the advertising revenue on Naver TV Cast, according to reports.

Naver TV Cast, which has a dismal market share even compared to other Korean video platforms, just wanted to focus on elevating its brand and position by securing high-quality content and providing new user experiences that can help it sustain itself amid an upsurge in mobile traffic, sources said. 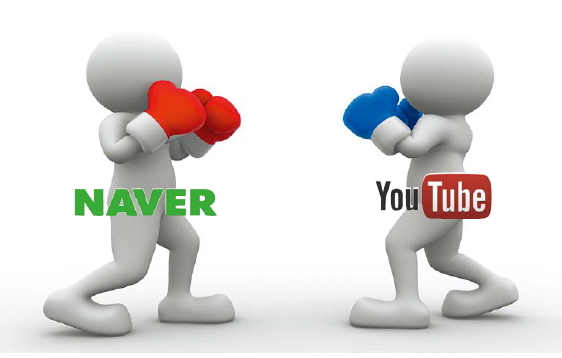 The latest deal has the potential not only to affect Google’s share but also change the video consumption landscape and the future business relations between content producers and platform players, market watchers said.

“The issue is important as the results of the conflict will likely shape a new business model and change how people (here) view visual content on the Internet,” said Kweon Sang-hee, a journalism and mass communication professor at Sungkyunkwan University.

Google’s YouTube has been widely considered a platform that can help boost exposure of content and launch the careers of unknown stars and filmmakers. It has also been viewed as an effective marketing platform for small and medium-sized enterprises.

It has had a series of hits from Korean content especially music videos such as Psy’s “Gangnam Style,” which has increased the network effect of Korea’s TV dramas and popular music.

However, Google’s video platform, which reportedly takes 45 percent of ad revenue, has been facing criticism from producers and distributors worldwide, saying that their cut is too low when taking into account the financial resources needed to create high-quality content.

Industry sources said that providers generally end up with almost nothing, even if they attract advertisers, adding that it is now best to strategize by showing videos on multiple platforms after reviewing each platform’s profit-sharing terms, and strengths and weaknesses.

Google’s YouTube said in response to the latest conflict with TV stations that it will continue to serve as a platform where users can watch Korean content and learn about the culture.

“Our goal is to help connect people around the world with the content they love, and we work with a wide variety of content partners to help bring their videos online for everyone to enjoy,” Google said in a statement.

“We look forward to continuing to make YouTube a dynamic and rich content platform where local and global users alike can learn more about Korea.”