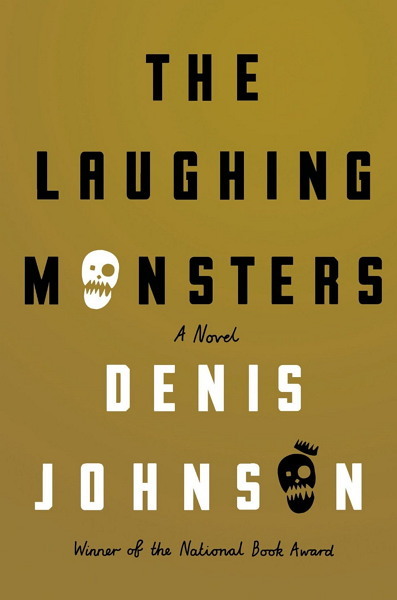 
Denis Johnson, winner of the National Book Award for his Vietnam-era opus “Tree of Smoke,” has jumped genres again in “The Laughing Monsters,” a new thriller set in Africa.

Johnson has done chameleon-like genre switches before, producing the noirish “Nobody Move” that evokes Elmore Leonard’s style and a Western of sorts, “Train Dreams,” that has a dash of Cormac McCarthy. Both books are solid works in their own right.

“The Laughing Monsters” plunges protagonist Roland Nair into Sierra Leone, years after the country’s savage civil war ended and before the recent arrival of the dreaded Ebola virus. Nair steps off the plane into “the steam heat of West Africa” and into “the usual throng of fools” in the terminal who are looking to hustle innocent tourists. But Nair, who works for some NATO intelligence outfit, has been here before and is no easy picking. He is looking to hook up with Michael Adriko, a Ugandan friend and soldier-of-fortune type who has shared some adventures with Nair and who holds out the prospect of making money on some scheme.

This is territory sometimes plumbed by John le Carre, whose protagonists are often slightly flawed but who, in the end, often want to do good.

But Nair is not just slightly flawed; he seems to be pretty rotten. He is a committed boozer and uses prostitutes. He is also willing to sell access to a nation’s secrets in the war against terror. Nevertheless, Johnson does a neat trick in developing reader empathy for Nair as he gets together with Adriko and his girlfriend, the daughter of a U.S. special forces commander. Maybe the fact that Johnson wrote “The Laughing Monsters” in the first person has something to do with Nair’s likability: He is not a man who is full of self-loathing, so how can the reader loathe him?

Many of Nair’s observations and thoughts are relayed in emails he writes to a girlfriend, messages that he rarely is able to send because of Internet challenges in backwater hotels. The trio heads across the continent to Uganda and then to Congo, the voyage described in vividly sketched scenes and with dialogue that jumps off the page. Their luck goes from bad to worse as they go deeper into the bush and leave the amenities of civilization behind. At one point they are in a village when one of the area’s various armed groups attacks it.

“A woman burst onto the path ahead of us with eyes like headlights, running with her hands high in the air. Bullets tugged at the banana leaves around her,” Johnson writes, using a few sharp details to describe a moment that is memorable and seems to come to life. Johnson visited Africa to get a feel for some of the places. Consequently, realism abounds in his prose.

At the end of his journey, Nair might not find redemption, and he might not even desire it. But this is also a tale about friendship, and the extent to which it can endure a dangerous journey and possible betrayal. If Nair can be true to a friend, he might be redeemed to some extent after all, even if he remains a scoundrel.

“The Laughing Monsters” is a masterfully written tale that describes a descent into one of the darkest corners of Africa and into the dark corners of the mind of man. (AP)