[Herald Interview] ‘Korea to step up investment in green technology’

By Kim Yon-se
Published : Nov 13, 2014 - 21:15       Updated : Nov 13, 2014 - 21:15
Environmental protection is often associated with long-term visions and carefully designed projects. As with other industries, however, governments and agencies around the world are newly discovering the importance of speed in the worldwide competition to develop green technologies.

The stakes could not be higher. The eco-friendly market is developing at a rapid pace, spurred by a slew of innovative technologies amid intensifying competition around the world. A revolutionary technological breakthrough could bring enormous disruption to related industries overnight; a single misstep or delay could backfire badly, so even nimble players are encouraged to push forward faster.

As far as the speed of getting things done is concerned, few countries could outpace South Korea, where cutting-edge green technologies are being developed and used at a rapid pace.

“South Korea’s environmental sector is growing faster than ever,” Kim Yong-joo, president of the Korea Environmental Industry and Technology Institute, told The Korea Herald. “Korea’s environment technology has rapidly advanced to a level that is now comparable to 60-70 percent of that of major developed countries.” 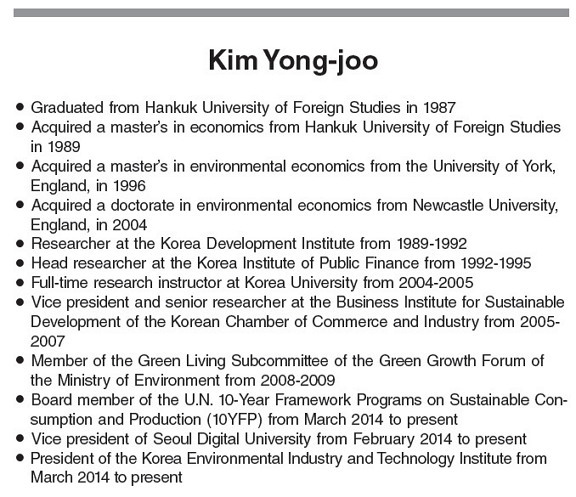 According to data held by KEITI, the domestic environment-related industry expanded 14.9 percent a year with annual sales of about 82 trillion won ($76 billion) over the past five years, while that of the world posted 3.5 percent yearly growth on average.

Korea was a latecomer in the eco-friendly solutions industry. But a growing list of Korean technologies are joining the ranks of the top global players. For instance, an advanced water treatment system developed here has ranked among the world’s top five systems, illustrating how far the country has come in the sector.

Kim said that Korean players were tapping into other promising items that could pave the way for a faster and more rewarding expansion of the green industry: smart water supply systems, environmentally friendly vehicles and finding uses for abandoned metal mines.

What’s noticeable is the impressive performances of small Korean players. KEITI, a state agency, noticed the potential of such companies in specializing in green technologies, not least because they can react quickly to rapidly changing market conditions. The agency has helped such firms to make inroads overseas in the past few years, and the results are promising. Since 2010, about 50 environment-oriented small and medium-sized enterprises have logged exports worth 1.5 trillion won with the support of KEITI.

The agency is now pursuing a bigger goal, Kim said. Under a large-scale research and development project, dubbed the “Next-Generation Eco Innovation,” KEITI has earmarked 1.6 trillion won for a policy fund to be spent by 2021 to help Korea secure the world’s top eco-friendly solutions and technologies.

Kim said Korea would become a leading player in the emerging environment-related markets, including the quickly expanding market in China.

Kim, who took office in March 2014, has taken the initiative in performing overseas projects. In consultation with the Chinese authorities, KEITI embarked on a denitrification technology project in Shandong province, which aims to reduce fine dust levels and map out solutions to curb air pollution.

The agency also has set up a coordination network by dispatching researchers to China, Vietnam, Indonesia, Algeria and Colombia.

Kim’s concurrent position as a board member of the U.N. 10-Year Framework Programs on Sustainable Consumption and Production is playing a key role in sealing partnerships with global organizations including the Economic and Social Commission for Asia and the Pacific.

KEITI, in close consultation with the Ministry of Environment, is also focusing on African and Central and South American countries as part of its efforts to help Korean SMEs advance into new markets and diversify export destinations.

He visited Colombia and Costa Rica in June, leading a 25-member delegation including Environment Ministry officials and CEOs of small enterprises.

The delegation members shared views on ways to improve public sewage facilities with senior officials in Colombia, and they explored the introduction of high-end waste disposal technologies in Costa Rica.

As for the greater control imposed on greenhouse gas emissions by global regulators, Kim said KEITI is spearheading the country’s response by encouraging consumers to buy low-carbon products.

“Through eco-labeling on low-carbon products, Korea has reduced carbon dioxide emissions by 2 million tons from 2010 to October 2014,” he said. “The amount is equivalent to the carbon dioxide absorbed by pine trees planted in an area three times larger than Seoul.”

He said the institute continued to encourage the use of eco-friendly or low-carbon products through a series of certification programs, such as Korea Eco-Label and New Excellent Technology. “Furthermore, we support the sustainable management of corporations to encourage eco-friendly lifestyles.”

Reiterating that Korea was now sharing its environmental experiences with other nations, Kim said KEITI had been designated as one of the Asian representatives to the United Nations in the division of Sustainable Consumption and Production policies.

“We spare no effort to promote eco-friendly lifestyles in the international community,” he said.

KEITI also plans to introduce a new type of eco-labeling on carbon-neutral products. This will certify manufacturers that have eliminated carbon dioxide emissions through innovative reduction solutions or emissions rights purchases.

In September, the agency opened the Center for Creative Green Economy in its headquarters in Bulgwang-dong, Seoul, which allows individuals or enterprises to use the center’s equipment to apply for patents for their innovative ideas and products.

The center is currently supporting the commercialization of 20 creative products.

KEITI is also helping discover and foster new growth items in line with government policy. A case in point is Eco-Expo Korea 2014, which was held in Samseong-dong, Seoul, in October. The fair drew keen attention in both the business sector and among job-seekers.

The goal of the annual event was to seek “innovation” rather than simple improvements to the day-to-day environment-related performances of existing products. State-of-the-art products and services were showcased at the fair, with the participants including 246 eco-friendly enterprises and organizations.

KEITI chief Kim said he would widen the scope of the annual Eco-Expo Korea from a domestic-oriented environment fair to an international exhibition starting from 2016. Kim said the agency planned to seek collaboration with the Asian Productivity Organization to expand the scale of the exhibition.
“The core value needed for KEITI to move forward as a key agency in charge of environmental welfare is to pursue sustainable development,” Kim said. Environmental welfare refers to environmentally sustainable economic growth.

The Park Geun-hye administration adopted sustainable development as the pillar of its eco-friendly policy, a departure from her predecessor Lee Myung-bak’s “Green Growth,” which was criticized as giving too much weight to economic growth and job creation.

The Park administration’s policy places more emphasis on the recirculation of resources, environment-related health and safety, antipollution efforts and the spread of eco-friendly goods and lifestyles.

Aside from the eco-friendly product certification programs, KEITI is taking steps to hike investment in green technologies by teaming up with quasi-financial firms that invest mostly in new businesses.

The two parties are scheduled to hold a series of investor relations sessions and conferences in an effort to link the eco-related ventures and capital firms with funding capability.

Although venture capital firms poured about 2 trillion won into local start-ups in 2013, their investment in the specific eco-friendly segment accounted for only 0.5 percent of the total investment.

KEITI was established in 2009 through a merger of two state-run agencies involved with environmental research, commercialization of green technologies, export support and eco-labeling.

The institute has been working with foreign counterparts to help reduce carbon emissions and promote sustainable development.

It has been designated as one of the Asian representatives to the United Nations for sustainable consumption and production policies.

A graduate of Hankuk University of Foreign Studies, Kim formerly worked for the Korea Development Institute, the Korea Institute of Public Finance and the Korean Chamber of Commerce & Industry.

He received a master’s degree from the University of York in England and a doctorate from Newcastle University, both in environment economics.