[SUPER RICH] The allure of art

The superrich as patrons of the local art world

This measure has become gender-irrelevant. While men were not frequent customers in the world of art in the past, the situation has changed drastically.

Instead of collecting random pieces of work, these superrich collectors focus on finding those that can reflect their tastes and personalities. Art has also become an important factor in managing their businesses. The Korea Herald Special Investigative Team has researched some of the collections and galleries owned by Korea’s top corporate tycoons.

They are works that represent the so-called “art marketing” of Shinsegae vice chairman Chung Yong-jin. 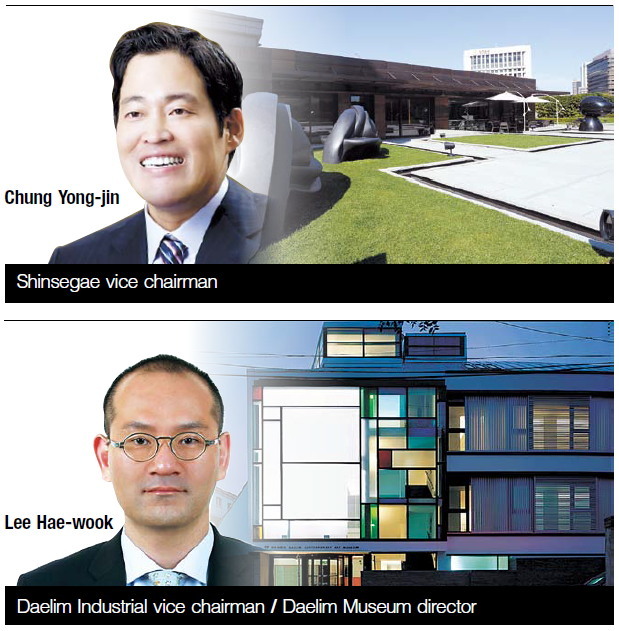 Since the reconstruction of the main store in 2007, Chung has put efforts into establishing a gallery-like store by spending about 35 billion won ($32 million) to bring in more than 100 famous sculptures and paintings.

It is surprising to see the museum managed by a son, and not a daughter, of a conservative Korean company that deals with heavy industries such as petrochemistry and construction, industry watchers say.

However, Lee is known to have an extensive knowledge in all things artistic. He was the one who sought to revamp Daelim’s image with the e-Pyunhansesang apartment brand, and he also came up with ideas for artsy advertisements.

Heungkuk Life Insurance, a unit of Taekwang, has many artworks on display at its main building ― such as Jonathan Borofsky’s “Hammering Man” and Ingo Maurer’s “Holonski Wall Lamp.”

The company established Ilju Academy and Culture Foundation in 1990. Since then, it has steadily been contributing to society via scholarships and cultural events.

The museum, built 275 meters above ground in a pristine area of Gangwon Province, gained much public attention even before it opened, with famous art figures such as Japanese architect Tadao Ando and American artist James Turrell involved in the project.

The building is surrounded by a trio of gardens, which serve as a stage for famous sculptural works by renowned artists such as Henry Moore and Choi Man-lin.

Samsung, meanwhile, possesses not only the riches and reputation but also several art museums: Leeum, Samsung Museum of Art, Ho-Am Art Museum and PLATEAU (formerly known as the Rodin Gallery).

They are all run by company chairman Lee Kun-hee’s wife Hong Ra-hee. In 2005, Hong was selected as a leading influential figure in Korea’s art world in a survey conducted by Artprice, a global leader in art market data.

Leeum is known for displaying interesting works of art with mass appeal, and the museum itself was designed by three masters of architecture ― Mario Botta from Switzerland, Jean Nouvel from France and Rem Koolhaas from the Netherlands. 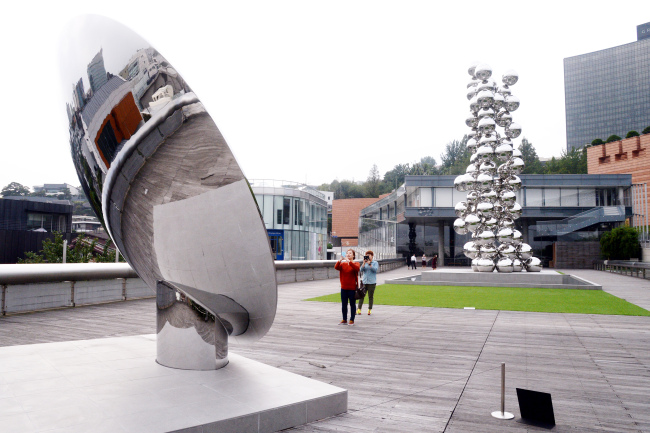 The now-defunct Daewoo Group was also involved in art. It was still in its golden age when its founder and former chairman Kim Woo-choong’s wife Chung Hee-ja began to take an interest in art collecting.

When Wooyang Museum ― formerly Sonje Museum ― was sold in her hometown of Gyeongju, North Gyeongsang Province, in 2011, Art Sonje Center, named after their son who died in a car accident in 1990, became the last remaining art museum of the Daewoo Family run by Chung. 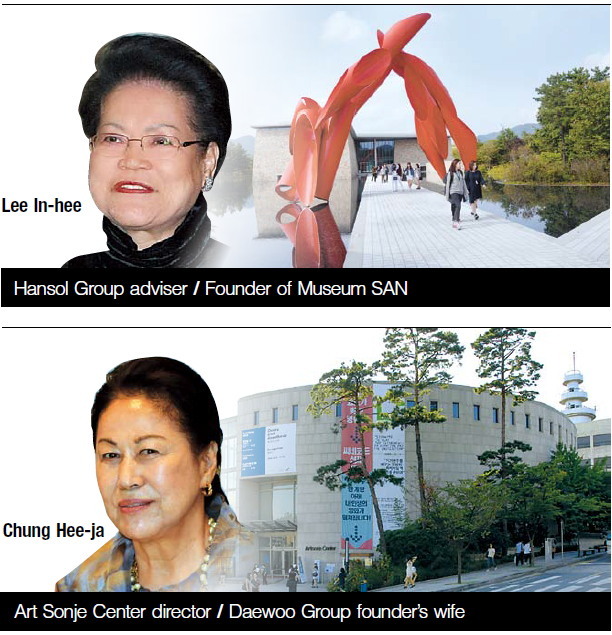 Ssangyong Group also has its own museum. Sungkok Art Museum, built in 1995 and named after the pen name of the late founding chairman Kim Sung-gon, is run by the former chairman Kim Suk-won’s wife Park Moon-soon.

The museum, which was formerly the founder’s residence, has a sculpture garden outdoors, along with exhibition areas in the main and annexed buildings that regularly attract visitors.

Despite the financial adversities Sssangyong has been facing since the 1997 Asian financial crisis, the museum has kept up its enthusiasm for art by helping to discover rising artists.

Kim In-sook, the eldest daughter of the founder, is endeavoring to maintain the art business of the Ssangyong Family by holding regular exhibitions.