By Claire Lee
Published : Oct 9, 2014 - 19:38       Updated : Oct 9, 2014 - 19:38
Parkinson’s disease is a degenerative disorder of the central nervous system due to the death of dopamine-generating cells in the substantia nigra of the brain. While tremor at rest, bradykinesia, muscle stiffness and postural reflex impairment are the four most common symptoms of Parkinson’s disease, the disease commonly causes various other symptoms.

Tremor is the most apparent and best-known symptom of Parkinson’s disease. A tremor appears in various body parts including the hand, leg and chin. However, about 30 percent of patients do not experience tremors. The characteristic of tremor in Parkinson’s disease is “tremor at rest,” which appears when the patient is in resting position, and it gets better when the patient moves the body. Consequently, tremor may not cause any real-life inconvenience. However, it is the most stressful symptom due to the attention it attracts.

Bradykinesia is the slowness of movement, rigidity of muscles, and stiffness and resistance to movement caused by increased muscle tone. Unlike the noticeable tremor, bradykinesia or muscle rigidity slowly develops and progresses. Consequently, it could be seen as tiredness of the limbs or as a symptom caused by the aging process. A person could have Parkinson’s disease if he or she has difficulty walking compared to other people of the same age, ordinary tasks such as cooking are done slowly, and his or her face looks scary due to a fixed vacant facial expression. The patient often tends to have less movement in the severely stiff muscles, Parkinson’s disease symptoms that may be mistaken for a stroke or frozen shoulders. 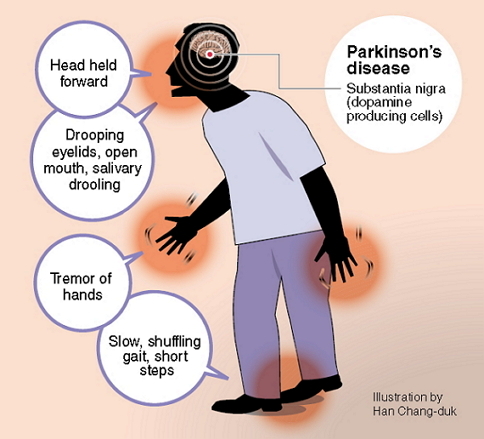 A patient with Parkinson’s disease is likely to have reduced arm swing on one side when walking, take small steps, and bend forward slightly at the waist. Patients often show a freezing of the gait such as shuffling with one’s feet close together and having trouble with turning around. Patients frequently fall when postural reflexes have decreased. Moreover, patients with osteoporosis should be fully alert to the possibility of bone fractures. Since it is rare in the initial stage of the disease, it may not cause a big problem at first. However, as the disease develops gradually, the quality of the patient’s life may be largely impacted by bone fractures and limitation on activity.

Specific exercises and food cannot cure or improve the symptoms of Parkinson’s disease. Consequently, having a good balance of all foods and constant exercise are very important. It is important for the patient’s condition to do a sweat-inducing exercise four to five times per week and exercise properly.

Since Parkinson’s disease may frequently cause bending forward or twisting in position, the patient should always try to maintain correct posture. Also, the patient should have a well-balanced diet including protein, foods preventing constipation such as multigrain rice, vegetables, fruits and dairy products, and sufficient water intake. These lifestyle habits may seem small at first, but the patient must keep in mind that these lifestyles may have a big impact on the development of the disease and control of the symptoms as time goes by.

Parkinson’s disease is a very slow-progressing disease. The patient should trust a medical team for treatment rather than be discouraged or worried. It is important to have a positive attitude and try to change to have a better lifestyle.

Youn Jin-young is a doctor at the department of neurology at Samsung Medical Center and professor at Sungkyunkwan University’s School of Medicine. ― Ed.