By Claire Lee
Published : Sept 11, 2014 - 21:02       Updated : Sept 11, 2014 - 21:02
Amyotrophic lateral sclerosis is also known as “Lou Gehrig’s disease,” named after the legendary New York Yankees first baseman who suffered and died from this disease. ALS causes the muscles to become rigid, atrophied and weak due to damage to motor neurons located in the brain and on the side of the spinal cord.

Early symptoms of ALS include a lack of strength in the limbs. The weakening of the fingers and ankles causes patients to drop light objects or fall down frequently. As the disease progresses further, respiratory muscles become paralyzed, which eventually leads to death.

Steven Hawking, a world-famous physicist, is an exceptional case. He developed ALS in 1963, when he was only 21. He has been fighting against the disease for 50 years while achieving tremendous things with his research. Patients with ALS can live for longer than 10 years, but such cases account for only about 10 percent of the entire patient population. In Korea, Park Seung-il, the former coach of Ulsan’s pro basketball team, Mobis, has been battling ALS for 12 years. One out of every 100,000 people will develop the disease. The average age at which people develop ALS is slightly higher in Korea than in Western countries. Men in their 50s and older have the highest incidence of the disease.

Professor Kim, a team leader of the neuromuscular disease program at the Neuroscience Center in Samsung Medical Center described ALS as a divine punishment that traps the spirit of a normal person in a paralyzed body. He said, “ALS can be misunderstood as a common muscle disease since the symptoms, such as weight loss and paralysis of the limbs, are similar to those of muscle disease. Acquired muscle disease can be completely cured or considerably improved when it is treated over a long period of time. With ALS, however, paralysis of the motor neurons progresses while the sensory motor functions continue to work, which eventually leads to the complete paralysis of a patient’s body though consciousness remains normal.” 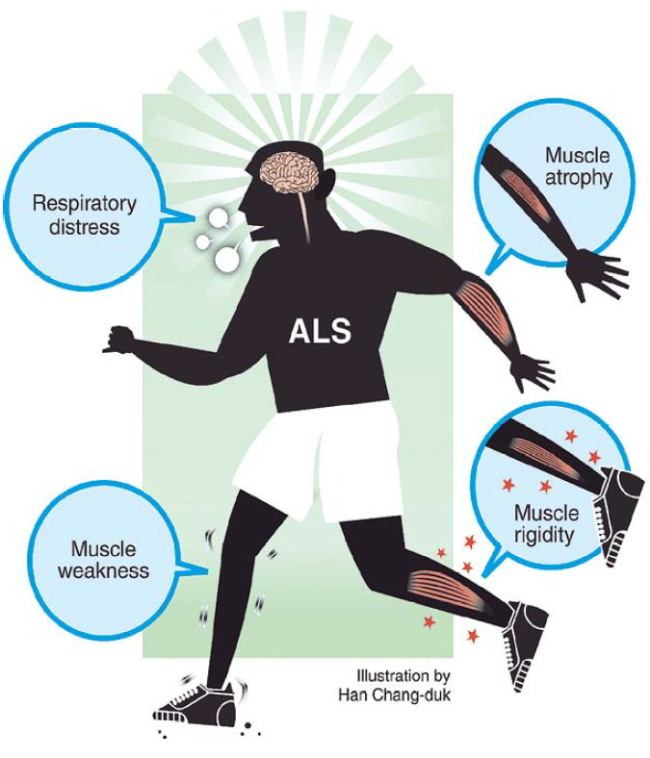 The exact cause of ALS has yet to be discovered. It is thought to be a genetic disease caused by a mutated chromosome inherited from the parents, but according to some theories, ALS is caused by heavy metals or viruses. Therefore, there is no proven drug for ALS. The only drug which has been proven effective is Riluzole. However, it can only extend the duration of life by several months and cannot help recover muscle strength or improve the quality of life.

Though there are several ongoing studies of ALS, they are progressing slowly. In June 2012, a research team at the University of Massachusetts Medical School published results in Nature, an international academic journal of science, showing that mutations in profilin (PFN1), required for the growth of axons in neurons, increased the likelihood of ALS. In Korea, a stem cell medication that has been shown to slow down the progress of ALS was approved for marketing by the Korean Food and Drug Administration last month.

Professor Kim said, “Many patients who suffer from ALS tend to experience respiratory paralysis within three to five years after the occurrence of the disease. Since ALS is known to be an incurable disease for which a fundamental treatment has not yet been found, the neuromuscular disease program at the Neuroscience Center strives to give advice on maintaining quality of life, and to adjust the additional remedies to suppress the progress of the disease according to the conditions of the patients.”

He also mentioned that nutrition management is very important for slowing down the progress of the disease. Respiratory management, including the use of a respirator, is needed when the patient starts to experience difficulty breathing. Family members should know how to tend to and manage the patient. For conservative treatments, regular medication and hospitalization may be required, according to the symptoms. If a certain decision has to be made according to the level of the disease, helping the patient to make the right decision is necessary. As well, the medical team has a significant role in helping patients and families cope with the disease as it progresses.

Kim Byoung-joon is a doctor at Samsung Medical Center’s Department of Neurology and a professor at the Sungkyunkwan University School of Medicine ― Ed.