By Korea Herald
Published : Aug 18, 2014 - 20:46       Updated : Aug 18, 2014 - 21:32
South Korean companies and people have long compared themselves to Japanese counterparts to measure their success. But things have changed in the past few years as the number of Korean success figures has overtaken that of Japan.

Forbes put 26 Korean and 25 Japanese billionaires on its list of the world’s 1,000 wealthiest people on Aug. 15.

While it demonstrates the growth of the Korean economy, the higher number doesn’t equate to more wealth.

Korea narrowly has more people on the list, but the combined net worth of Japan’s 25 richest people is much higher at $92.7 billion, compared to the $68 billion held by the 26 Koreans.

The sources of wealth also contrasted between the two countries. Self-made wealth was more common in Japan, while the Koreans who made the list more commonly inherited their fortunes.

There were also differences in age demographics. Middle-aged industrial magnates who were trained to head conglomerates from an early age commanded a majority in Korea, but Japanese billionaires were either elderly or they were young leaders who founded their own information technology-related companies.

Twenty of the 25 Japanese billionaires had founded their own companies. In contrast, six of the 26 Korean billionaires were considered to be self-made.

This is because elder Japanese founders are still at the managerial forefront, while Korean founders generally transfer control of their firms to second and third generations. 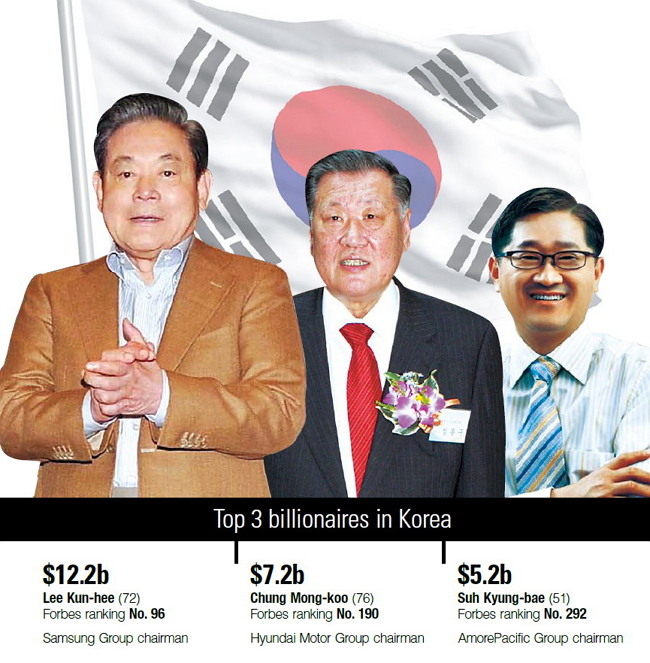 Not surprisingly, the Korean list exposed the nation’s concentrations of wealth. Five of the 26 billionaires, including Lee Kun-hee, help manage the Samsung empire. Their combined fortunes reached $21.5 billion.

By adding three more people related to the late Samsung Group founder Lee Byung-chul, the total wealth of Samsung-related people on the list is $26.3 billion, more than 30 percent of the total net worth of the 26 Korean billionaires. 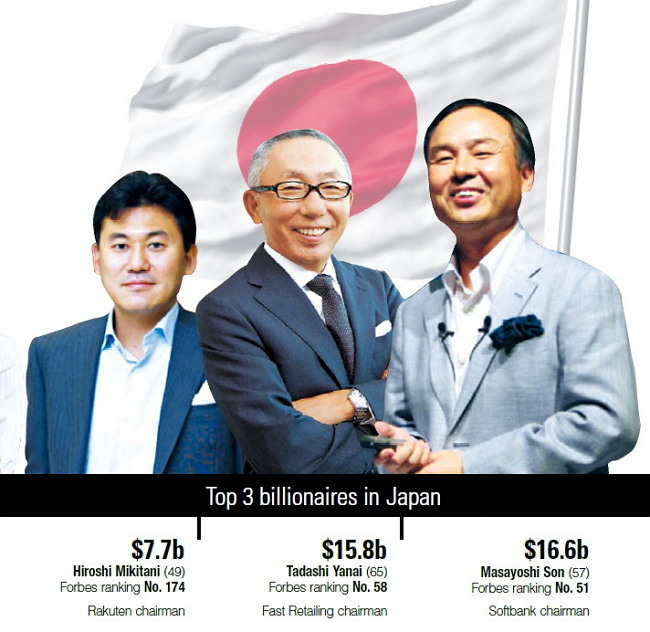 In contrast, of the 25 Japanese billionaires, only four were related to other people on the list. Softbank’s Son and GungHo Online Entertainment founder Taizo Son are brothers.

Yoshiko Mori, the wife of late Minoru Mori, inherited part of Minoru’s estate. Minoru inherited his initial fortune from his father, along with his brother Akira, another billionaire who leads the Mori Trust.

One common characteristic among the Japanese billionaires is that they manage businesses even in old age. In Korea, younger successors inherited their parents’ companies, according to the Forbes list.

Among the 25 Japanese billionaires, 11 were older than 70, making up more than 40 percent, compared to just five Koreans on the rich list.

But Japan also has more young billionaires than Korea.

The list had three superrich Japanese in their 30s, all self-made billionaires who took risks with fresh ideas and took advantage of the abrupt shift from PC to mobile.

Naruatsu Baba, 36, was the youngest Japanese tycoon to join the Forbes list with the stock of his smartphone-game maker Colopl, which he founded in 2008 as a developer.

Yoshikazu Tanaka, the founder and CEO of social networking game operator Gree, and Yusaku Maezawa, the founder of online fashion mall Zozotown, are 37 and 38, respectively.

Zozotown has gained popularity among young buyers by providing new services like same-day delivery in Tokyo. The website has more than 3 million buyers who can go to 581 stores offering over 2,200 brands.

In Korea, Lee Seo-hyun, the 40-year-old second daughter of Lee Kun-hee, was the only billionaire under 40. The head of the fashion division at Cheil Industries, formerly Samsung Everland, is working on expanding the fashion business, including the acquisition of Colombo Via Della Spiga, a purveyor of mink coats and other extravagances.