An inspirational leader beyond religion, pontiff due here Aug. 14-18

“This is a miracle. What else can I say?” said the priest who wrote to the pontiff several times to invite him to the sixth Asian Youth Day. No pope has ever attended the event.

He believes that it was God’s will that the pope, revered by many Catholics and non-Catholics as an exemplary, inspiring leader, read his letter, out of the many that the highest clergy gets from all over the world, and decided to accept the invitation.
That “miracle” will become reality on the morning of Aug. 14, when Pope Francis arrives in Korea for a five-day trip ― his first outing as pope to this part of the world.

Catholics have long been a minority in Asia, with the notable exception being the Philippines.

Only about 10 percent of Koreans are Catholic. But what draws the attention of him and the Vatican is the church’s vigorous growth here, a positive public image and a strong youth base, a far cry from the situation in Europe.

“As the theme of his Korean visit indicates, the Holy Father wants Korean church to ‘arise and shine’ on the world,” said Bishop Mario Toso, secretary of the Pontifical Council for Justice and Peace. 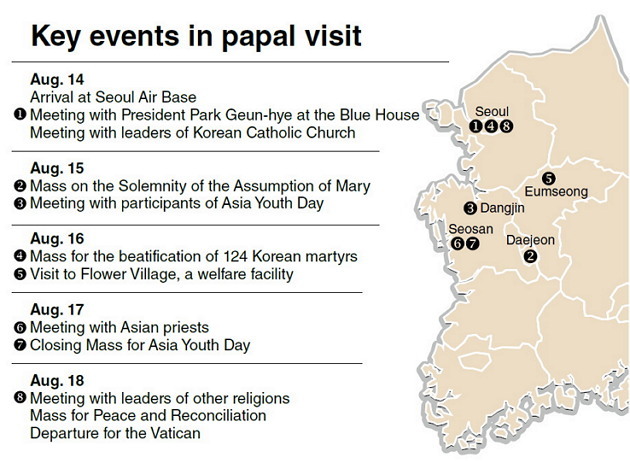 In fact, the pontiff’s schedule here is predominantly spiritual, focusing on martyrs and young believers. His itinerary is filled with visits to sacred sites in rural areas, meetings with the faithful and liturgical events which will be topped off by a large-scale outdoor Mass on Aug. 16 to beatify 124 Korean martyrs.

Shuttling between Seoul and rural towns in Chungcheong provinces by helicopter, the pope is also scheduled to visit a Catholic-run welfare facility, meet with former “comfort women” who were forced to serve as sex slaves for Japanese soldiers during World War II, and console beleaguered families and survivors of a ferry disaster that killed over 300 in April.

Of course, he will meet with President Park Geun-hye.

For some, the itinerary is a bit of a letdown.

They want the pontiff to pay more attention to Korea’s many social wounds and meet “real” people, not those representing the church.

Still, records show what makes this pope so unique and loved are his unscripted gestures and messages, not the scheduled formal events.

In his apostolic voyage here, the 78-year-old leader is widely expected to stick with his humble, down-to-earth yet modern style, which has set him apart from his recent predecessors and earned him a popularity that none of them had seen.

“Koreans really miss figures like him, someone we can truly look up to,” Biship You said.

He hoped that Koreans would be inspired by the pope and find a way to move beyond the conflicts, anguishes and sorrows that have gripped today’s Korean society.