Early last year, the state-run rail operator launched the O-train and V-Train, with the goal of showcasing some of Korea’s hard-to-reach inland rural areas.

Spring, summer, fall or winter, the exclusive sightseeing trains are designed to give passengers easy viewing access to these spots, with large windows and seats that can be rotated to face outside. And unlike high-speed trains whose purpose is to get passengers to their final destination as quickly as possible, the O, V and S sightseeing trains run at more leisurely speeds to maximize the sightseeing opportunities. The trains idle for several minutes at each station to allow passengers to disembark and take pictures outside. 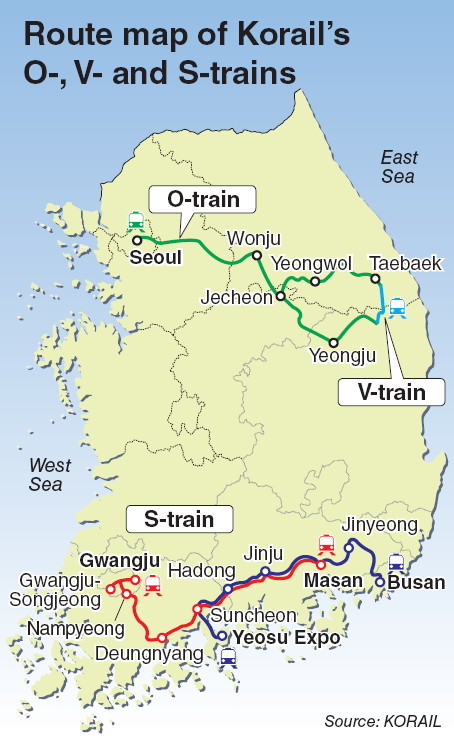 The O-train ― getting its name from its circular route ― loops from Seoul through Jecheon, Taebaeksan Mountain and Yeongju and then back to Seoul. It takes approximately 4 hours and 50 minutes to compete the entire 257.2-kilometer course.

Korail also offers passengers opportunities to rent cars by the hour for those who wish to get off the train at a specific station to do further sightseeing. When finished, passengers can return and ride the next train, or spend the night at one of the local lodgings and ride the returning train the next day.
The V-train, which is actually a subset of the larger O-train trail, cuts through the mountainous area of the Baekdudaegan valleys, departing from Cheoram, Gangwon Province, and finishes at Buncheon, North Gyeongsang Province. This one-way trip takes approximately 70 minutes to complete.

The Baekdudaegan mountain range is commonly referred to as the “spine of the Korean Peninsula” and is a standing testament to the nation’s rich heritage and culture. The natural resources of this mountain range provided the country with countless means of economic growth. Now that it is no longer relied on for its industrial resources, KORAIL representatives said the rail firm jumped at the opportunity to re-introduce citizens to the area and its natural wonders.

For visitors wishing to take the V-train from Seoul, it is recommended to first take the O-train, which connects to Seoul, and then transfer to the V-train.

Aside from inland areas, popular southern coastal getaways such as Busan and Yeosu and the vivid green tea plantations of Boseong boast some of the most scenic views on the peninsula.

The S-train is Korail’s latest addition to its line of sightseeing trains, with the goal of showing off Korea’s southern regions ― hence the “S.”

The east-to-west route takes about four hours and the west-to-east route is approximately 5 1/2 hours long.

Although the S-train is not simple for travelers to navigate stopping far away from the departure point, the train is a unique way to experience a wide-range of southern regions.

So whether its rice fields, mountain ranges, rivers or countryside villages, the O, V and S trains are all an inexpensive way to catch a glimpse of a lot of different areas of Korea on a single trip. All the trains are also equipped with a camera on the front of the locomotive, so that travelers can watch real-time footage of the train’s front path on screens in the passenger cars.

The trains also have cafes and snack bars, children’s play areas and other conveniences. The cafeteria sections of the trains have bar areas where guests can order food and snacks as well as their own quaint cafe settings, with tables, bar stools and even baristas serving hot and iced coffees.

The S-train even has a tea cart, the first of its kind on any Korean train. The tea cart offers guests a chance to view and participate in traditional tea ceremonies and enjoy tea from various regions of the southern coast, including Korea’s famous Boseong green tea.

Korail offers various packages for the O, V and S-trains, which can be purchased through the KORAIL official website or at stations.

For more detailed information on each of the sight-seeing trains, visit letskorail.com.