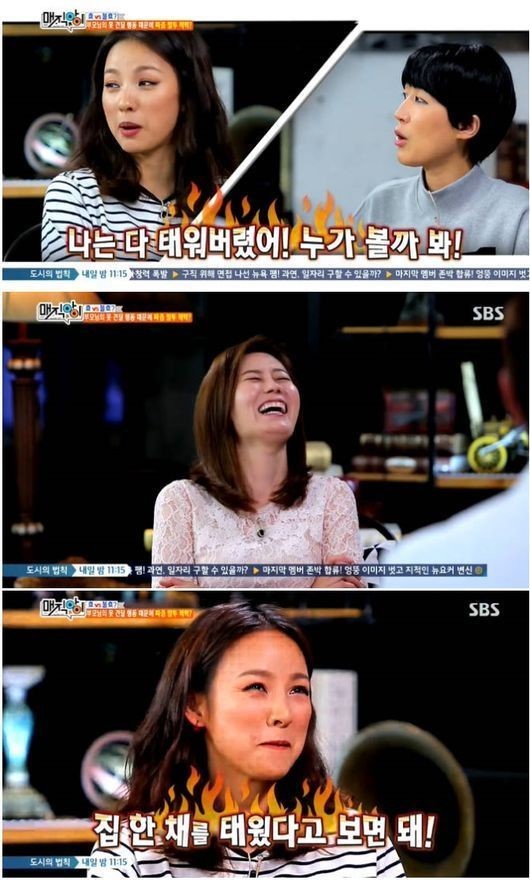 K-pop diva Lee Hyori said in a television program on Tuesday that she has burnt all the photos she took with her former boyfriends.

In the SBS talk show “Magic Eye,” the hosts including Lee, actress Moon So-ri and model Hong Jin-kyung talked about their past experiences with ex-lovers.

Hong said, “After my marriage date was confirmed, my mother chucked all my photos with my ex-boyfriend without my permission. They were cherished memories and I wanted to keep them under cover for myself if I had to. I looked through trash cans outside in the pouring rain.”

In response to Hong, Lee said that she burned all the photos of her previous lovers before marrying her current husband, the singer Lee Sang-soon. The couple tied the knot in 2013.

“What if someone ever sees them? I have burned them all ... it was almost like a camp fire,” she added, drawing laughs from fellow hosts and guests.

“Magic Eye,” hosted by three stars in their 30s, invites a few special guests every week to share candid talks about their personal experiences, ranging from love and marriage to social affairs. It airs every Tuesday night on SBS.
Lee debuted in 1998 as a member of the first-generation girl group Fin.K.L. She gained nationwide popularity as a sexy icon in the early 2000s with the hit song “10 Minutes,” sweeping local charts and awards.