South Koreans are known to be heavy consumers of sodium, ranking at the top worldwide in terms of their daily intake. According to World Action on Salt and Health, South Koreans consumed a daily average of 4.878 milligrams of sodium in 2010 which is 2.4 times higher than the WHO’s recommended daily intake of 2,000 milligrams.

Dr. Cho Young-yun from the Department of Dietetics at Samsung Medical Center said consuming too much sodium increased the likelihood of heart and kidney diseases and high blood pressure. It may also increase the risk of getting stomach cancer and having a stroke, according to World Action on Salt and Health. 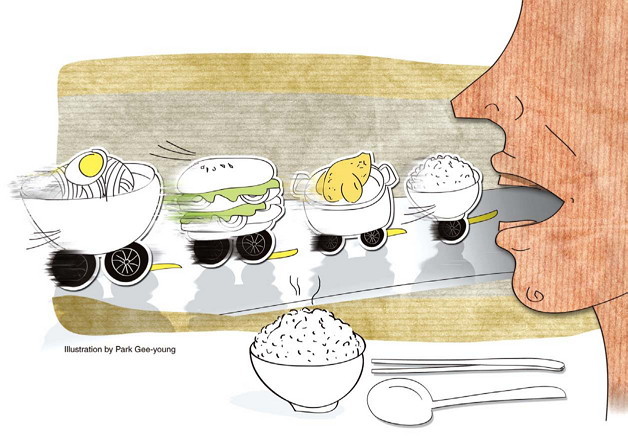 Korean dishes that are high in sodium include kimchi, salted seafood, ramen, and Korean soups and stews, said Cho.

“When you eat soups or stews, try to add spring onion or peppers instead of salt,” Cho said. “If you have high blood pressure or kidney or heart problems, try to avoid eating heavily salted kimchi. When you order your stew at restaurants, ask the server not to put salt in your dish.”

Aside from kimchi and Korean stews, such as tteokguk (soup with thinly sliced rice cakes) and doenjang jjigae (soybean paste stew), fast food such as pizza and junk food like ramen may also contain a lot of salt, Cho said.

Consuming too much sodium can be particularly dangerous for the elderly, as salt is thought to exacerbate the symptoms of asthma, Alzheimer’s disease and diabetes. It has also been found to increase the action of Helicobacter pylori, a bacterium which is known to be a major risk factor for stomach cancer.

South Koreans are also speedy eaters. According to a study organized by Dr. Kim Do-hoon at Korea University Ansan Hospital from 2007 to 2009, almost 90 percent of his patients during this time period finished their meal in under 15 minutes. Some 8,770 patients participated in Kim’s survey.

Eating quickly is a part of Korea’s “ppalli ppalli” (hurry hurry) culture, which is linked to the country’s accelerated economic development. However, eating quickly increases the risk of getting hyperlipidemia, which involves abnormally high levels of fat-soluble molecules in the blood. The disease can be prevented through healthy eating and regular exercise. Eating too quickly also increases the risk of reflux, indigestion and obesity.

It usually takes 15 to 20 minutes before our brain realizes that our stomach has received enough food and that it does not need any more. Eating quickly often leads to overeating because the brain does not receives the satiety signal from the stomach until it is too late. Such overconsumption then leads to weight gain and the issues associated with it.

The best way to slow down while eating is to make your dining time more enjoyable. Avoid stressful conversations and unpleasant company. Furthermore, avoid watching TV while eating. Relaxing music and dim lighting can also help you slow down during your mealtime.

Dr. Choi Bong-joon of the Samsung Medical Center says eating too quickly can lead to lifestyle-related diseases, such as diabetes and high blood pressure.

“Try to spend at least 30 minutes to finish your meal,” said Choi. “And try to chew your food at least 20 times before you swallow.”